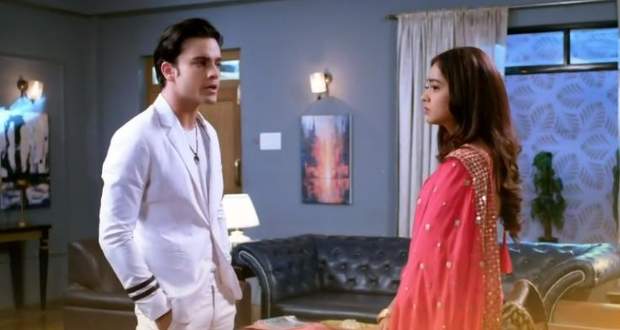 Today's Kumkum Bhagya 9th June 2022 episode starts with Prachi asking Ranbir to get lost in front of her eyes as she does not want to see him at all.

Ranbir remembers Prachi’s mood swings due to pregnancy and silently listens to Prachi.

To obey Prachi’s command, Ranbir gets into the washroom and waits till Prachi asks him to get out.

Prachi tries to open the door by herself but fails in doing so.

Suddenly, Ranbir hears a loud thud and gets out of the washroom to check on what’s happening outside.

Ranbir spots Prachi lying on the floor in an almost fainting stage and gives her a hand after she asks.

Prachi gets offended by Ranbir’s behavior and tells him that he does not care about her a bit.

Trying to persuade Prachi, Ranbir attempts to calm down Prachi but gets hit by Prachi’s extreme outbursts.

Ranbir takes Prachi and gets out onto the terrace through the window.

After coming under the moonlight, Ranbir asks Prachi to recall how both of them met for the first time.

Prachi sulks at Ranbir but Ranbir stresses the moment he saw Prachi for the first time and tells her how he fell in love instantly.

Ranbir tells Prachi that he loves her immensely and apologizes for hurting her in the past.

Meanwhile, Rhea mocks Dida who lays on the bed unconscious which Stanley sees from inside the cupboard.

Rhea walks toward the cupboard after hearing a noise but gets stopped by Pallavi.

Ranbir gets on his knees and pulls out the ring asking Prachi if she can make a fresh start with him once more in life.

However, Prachi refuses to accept the ring and reminds Ranbir that he is married to Rhea.

Ranbir tells Prachi that he is guilty of his deeds and wants to make everything correct.

As Ranbir says that he knows what Prachi has hidden from him all this time, Prachi gets nervous.

Ranbir reveals that he is aware of Prachi’s pregnancy and knows that they are pregnant.

Prachi gets a bit emotional as Ranbir asks for forgiveness while sitting on his knees as he wants to be a good father to his child.