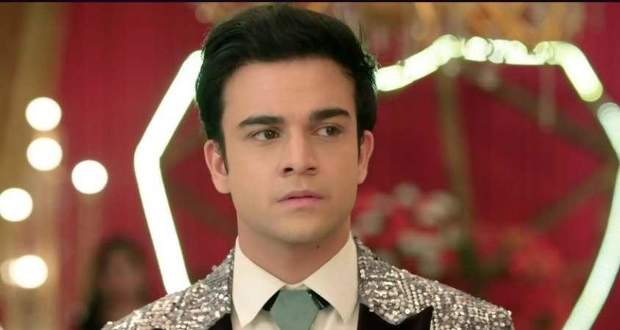 Today's Kumkum Bhagya 9th March 2022 episode starts with Rhea going crazy with rage as she rubs off the black paint from her face.

Facing such an embarrassing defeat, Rhea acts like a madwoman continuously throwing away all the things in her room.

Aaliyah comes and tries to calm down Rhea to which Rhea rebukes her with brutal words.

Blaming Aaliyah for not finding the pregnancy reports, Rhea suspects that she is on Prachi’s side.

The situation takes the worst turn when Rhea taunts Aaliyah about her husband leaving her which leads to Aaliyah instantly landing a tight slap on Rhea’s cheek.

Aaliyah declares that Rhea shall solve things by herself from now on and not ask for any help from her.

As Aaliyah leaves, Rhea sheds tears of vengeance when Pallavi enters the room and expresses her disappointment in Rhea’s actions.

Pallavi tells Rhea that she will always be on her side but what she did to Prachi was unacceptable.

Meanwhile, Prachi hears Ranbeer being tense about an office file and decides to tell him about the pregnancy the next day.

The next morning, the whole Kohli family gets together in the Shiv temple to do the puja of Mahadev on the occasion of Maha Shiv Ratri.

With Dida telling the meaning behind the day of Shiv Ratri, Vikram asks Ranbeer to hurry up as he cannot wait to taste the thandai after reaching the house.

The Kohlis arrive at the house which looks marvelous, decorated, and crowded with guests.

Rhea fumes inside on seeing Ranbeer and Prachi getting playful and does a failed attempt in interrupting them.

On asking Ranbeer to lecture Prachi, Ranbeer reverses his anger on Rhea for her deed the earlier night.

Aaliyah drags Rhea with her into a room and explains to her why they always lose against Prachi in every challenge.

Rhea and Aaliyah decide to secretly execute their plan this time as Aaliyah instructs Rhea to drug Ranbeer by mixing tablets in his thandai so that she can have her honeymoon with him.