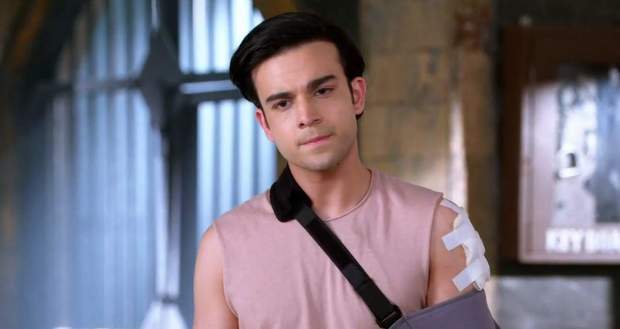 Today's Kumkum Bhagya 9th May 2022 episode starts with Rhea asking the police officer to lodge an FIR against Prachi and arrest her then and there.

Ranbir tells the officer that Prachi messed with the balcony railing to make him fall as they were having regular fights with each other.

While Ranbir requests the officer not to arrest Prachi, Prachi speaks up and asks Ranbir to stop defending her as she never asked him for help.

Prachi announces that she is innocent of this incident as she was not present at home when the accident took place.

After listening to both sides, the police officer declares that they will give Prachi 5 days to prove her innocence and take action after that if she fails to present anything in her defense.

Prachi leaves while Ranbir asks the officer how Prachi shall prove her innocence to which the officer replies that they need to know where Prachi was and with whom at the time of the accident.

Ranbir offers Prachi to sit in the front seat but Rhea conquers it before Prachi.

Meanwhile, Pallavi gets happy on seeing Rhea return to the house but changes her mood on seeing Prachi.

Prachi savagely replies to Pallavi that she is where she should be and gets warned by Ranbir not to behave in such a manner.

After explaining what the police said, Ranbir asks everyone not to misbehave with Prachi until she is found guilty.

Later, Prachi comes up to Ranbir and asks him if he believes that she can do something like try to kill Rhea.

Ranbir replies that he is sure that Prachi has done something wrong as she will not believe him if he says she is innocent.

Giving a cold shoulder to Prachi, Ranbir tells her that they should not talk to each other and asks her not to be concerned with what he thinks about her.

Prachi meets Rhea in her room who reminds her of the deadline of 5 days and tells her that she is going to be thrown out after that.

© Copyright tellybest.com, 2020, 2021. All Rights Reserved. Unauthorized use and/or duplication of any material from tellybest.com without written permission is strictly prohibited.
Cached Saved on: Sunday 2nd of October 2022 05:38:13 AM