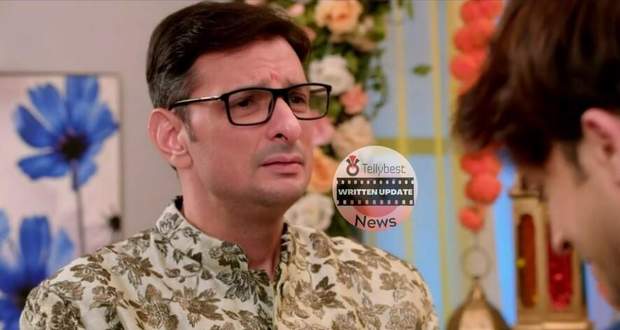 Today's Kumkum Bhagya 9th September 2022 episode starts with Dida and Mihika both escaping the dirty clutches of Alia and Rhea.

Mihika almost collides with Rhea while navigating her path but hides at the last moment succeeding in saving herself.

Just then, Wendy (Dida’s friend) comes there with her driver while Mihika hides in the trunk of her car.

Alia arrives with her car and asks Rhea if she has found Mihika which makes Rhea lose her cool.

After a round of arguments between Alia and Rhea about whose fault it was that Mihika escaped, Alia drives off to look for Mihika again.

Alia comes back while Rhea gets frustrated seeing Pallavi calling her continuously.

As Rhea picks up the call, Pallavi scolds her for being absent from the function and asks her to come back there immediately.

Alia tells Rhea that she knows a person who can find Mihika and drives back home with Rhea.

Meanwhile, Prachi tells Sahana how she is taken aback by Ranbir’s decision to marry Prachi to Siddharth.

Prachi says that she will leave the house immediately as she cannot tolerate others taking her life’s decisions.

However, Ranbir comes to the door and says that he will not let Prachi leave the house as he has promised her baby that he will give them happiness.

Prachi says that Ranbir had made several promises to his wife and the to-be mother of his child which are still unfulfilled.

Ranbir replies that his wife who was the to-be mother of his child is now the mother of another man’s child.

Seeing Ranbir and Prachi starting an argument, Sahana rushes off to call Dida as she is the only one who can stop them.

Ranbir holds Prachi’s face in his hands and tells her how much he loves her from his heart which will never change till his death.

Saying that he will live with Prachi’s memories, Ranbir asks Prachi to marry Sid and shift to London as he cannot see her with another man.

Both lose control of their emotions and start crying while hugging each other dearly in their arms.

A flashback shows Ranbir asking Prachi to listen to some of his decisions to which Prachi gladly agrees.

Ranbir reminds Prachi about that incident and persuades her to give her child a valid existence by marrying Siddharth.

As Ranbir begins to leave, Prachi stops him by hugging him from the back while both of them continue to shed tears.

Meanwhile, Dida gets surrounded by the goons and faints after one of them hits her on the head.