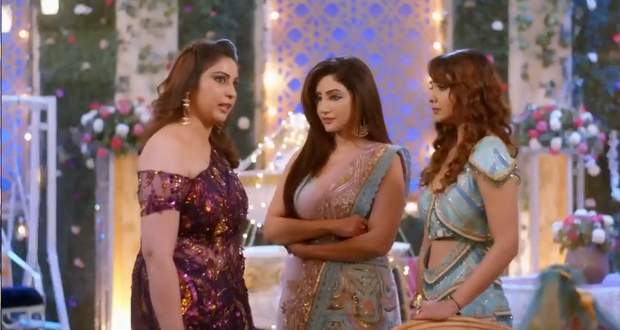 Today's Kumkum Bhagya 10 Nov episode starts with Prachi apologizing to Ranbeer for hurting him. Ranbeer promises her to give all the happiness to her.

He informs Prachi that his family is planning surprise engagement for him. He shows the engagement ring to Prachi and puts it on her finger.

Rhea gets jealous on witnessing all this, while Pragya takes care of Abhi and they both get emotional.

Abhi gets angry and asks Pragya to tell if she really loves him or not. Meanwhile, Pallavi asks Rhea about the reason she is crying.

Rhea tells her that Ranbeer put that engagement ring on Prachi’s finger. Pallavi promises Rhea that Ranbeer will only get engaged with her and not with Prachi.

Abhi doesn’t let Pragya go out from the bathroom and holds her in his arms, while Sarita arrives in the room and looks for Pragya everywhere.

Abhi teases Sarita and she leaves from there. Later, Mitali comes in the room and Abhi doesn’t let Pragya go out to meet her.

Prachi tries to remove the ring but it doesn’t get out easily. Ranbeer helps her and Prachi requests him to take the ring out so that people don’t notice it.

Ranbeer brings gloves for Prachi and asks her to wear them to hide the ring. Dida arrives there and behaves very rudely to Prachi.

Ranbeer takes a stand for Prachi and asks Dida to not to talk rudely with Prachi. Dida says that she is not feeling well and is hurt because Ranbeer shouted at her for the first time in life.

© Copyright tellybest.com, 2020, 2021. All Rights Reserved. Unauthorized use and/or duplication of any material from tellybest.com without written permission is strictly prohibited.
Cached Saved on: Sunday 9th of May 2021 09:58:37 PM