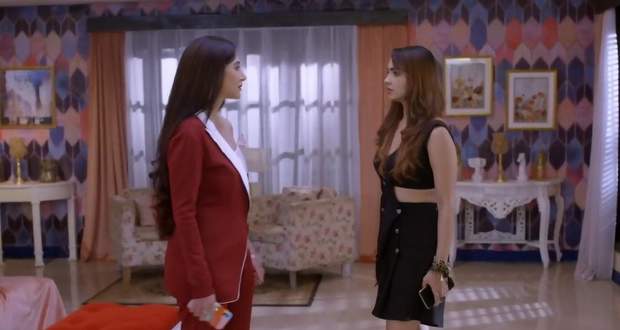 Today's Kumkum Bhagya 14 Oct episode starts with Ranbeer confessing his feelings to Prachi. He kneels down in front of Prachi and proposes her for marriage.

Aaryan waits for Ranbeer’s phone call to know about Prachi’s answer to his proposal. He makes a call to Ranbeer and gets happy when Ranbeer tells him that Prachi said yes to him.

Aliya overhears Aaryan talking to Ranbeer, while Rhea gets angry with Aliya for checking her phone. Aliya tries to provoke Rhea against Pragya by saying that Pragya only loves Prachi.

She informs Rhea that Ranbeer proposed Prachi, and Pragya also accepted their relationship. She asks Aaryan to come to Rhea’s room to tell Rhea about Ranbeer and Prachi’s relationship.

Aaryan thinks that he should tell the truth to Rhea so that she stop interfering in Ranbeer's life. He then informs Rhea about Ranbeer's relationship with Prachi and indirectly taunts her to stay away from Ranbeer.

Meanwhile, Sarita asks Ranbeer to stay back for some time. Pragya leaves to meet Rhea, while Rhea blames Aliya for separating Pragya and Abhi and warns her that no one can stop her from meeting her mother.