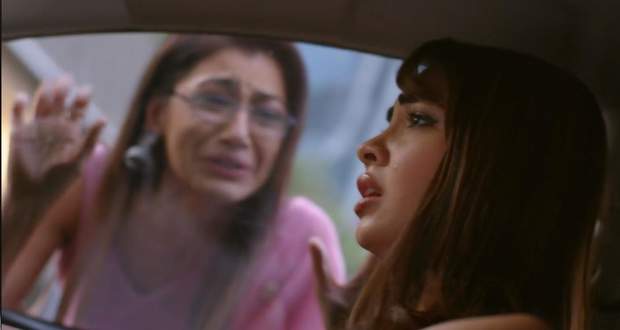 Today's Kumkum Bhagya 16 Oct episode starts with Rhea thinking that her mother doesn’t love her. Pragya knocks the door of the storeroom and asks Rhea to talk to her.

Abhi scolds Aliya for provoking Rhea against Pragya. Meanwhile, Rhea taunts Pragya for leaving her newborn child and calls her a selfish woman.

Pragya recalls the time when she left her daughter with Abhi, while Rhea leaves from there and Pragya follows her.

Abhi questions Aliya for the reason for provoking Rhea against her mother. Aliya informs him that Rhea feels that she is unlucky for her mother and that’s why her mother never came back to meet her.

Abhi tells Aliya that Pragya tried to meet Rhea so many times, whereas Aliya disagrees and him that Rhea feels alone all the time.

Abhi gets a call from Vikram to come to meet him at his home. Meanwhile, Ranbeer burns his hand while preparing tea and Prachi takes care of him.

Ranbeer intentionally burns his hand again to get Prachi’s attention. Prachi scolds him for increasing her workload and asks him to not to help her.

Rhea cries out loud and recalls when Aliya warned her that Pragya is a selfish woman. Pragya questions Rhea about her daughter and requests her to give information about her.

Rhea leaves from there in her car and Pragay falls down while following her. Further, Prachi dances on thinking about Ranbeer’s proposal. Ranbeer arrives there and compliments Prachi for being cute while blushing.

Prachi applies ointment on Ranbeer’s burns and they both spend a sweet moment together. Rhea comes there to Pragya’s house and witnesses Ranbeer and Prachi together.

© Copyright tellybest.com, 2018, 2019, 2020. All Rights Reserved. Unauthorized use and/or duplication of this material without written permission from tellybest.com is strictly prohibited.
Cached Saved on: Tuesday 1st of December 2020 01:02:57 AM