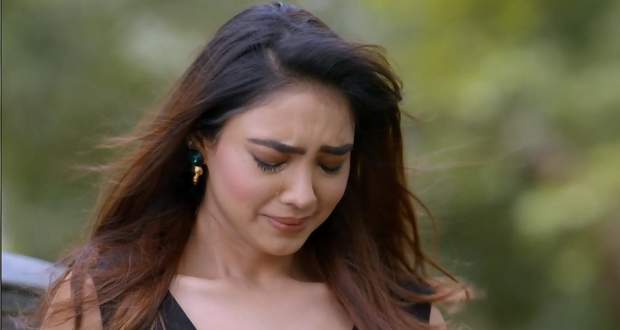 Today's Kumkum Bhagya 17 Oct episode starts with Abhi going to Vikram’s place to meet him. Abhi tells Vikram that he wants to break his friendship with him.

He suggests Vikram get Ranbeer married to Rhea, while Vikram and his family gets happy to hear the news.

Abhi goes to make a call to Rhea to give her the good news. Ranbeer gets a call from Vikram and he asks Ranbeer to come back home.

Abhi tries to call Rhea but she doesn’t pick his call. Meanwhile, Rhea is lost in thinking about Prachi and Ranbeer’s relationship.

Rhea picks Abhi’s call and says I love you to him. Abhi tries to tell her about her marriage but she couldn’t hear anything.

Rhea feels broken and decides to commit suicide by jumping off the cliff. A woman witnesses Rhea standing at the cliff and tries to stop her from committing suicide.

Pragya reaches her home while thinking about Rhea’s words for her daughter. She wonders how Rhea knows about her second daughter.

Ranbeer informs Prachi’s family that his family is convinced for his marriage with Prachi. Elsewhere, Rhea comes back her home after people stopped her from committing suicide.

© Copyright tellybest.com, 2018, 2019, 2020. All Rights Reserved. Unauthorized use and/or duplication of this material without written permission from tellybest.com is strictly prohibited.
Cached Saved on: Wednesday 28th of October 2020 02:12:29 PM