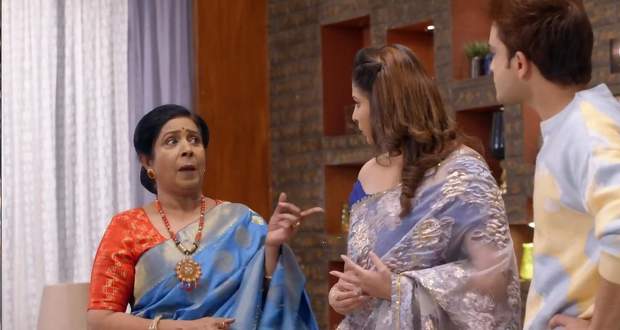 Today's Kumkum Bhagya 19 Oct episode starts with Rhea locking herself in her room. Aliya tries to talk to her but Rhea shouts to leave her alone.

Abhi returns home and calls everyone to get together in the hall. Mitali asks Aliya to inform Abhi about Rhea’s bad mood.

Vikram reminds his family to make sure they all give a surprise to Ranbeer about his marriage. Ranbeer reaches his home and his family members tease him a lot.

Ranbeer assures his family that he is all set for his marriage. Everyone pulls his leg by telling him that he is not a grown-up guy to get married.

Aaryan makes a call to Ranbeer and questions him if Prachi has agreed to marry him. Elsewhere, Shahana teases Prachi for not letting any other girl like Ranbeer.

Pragya makes a call to Rhea but Sarita stops her from making a call. Meanwhile, Shahana takes Prachi to a beautiful restaurant and the staff shuts the main door.

Prachi starts panicking and screams at the manager to open the door, while Shahana leaves from there leaving Prachi alone.

Ranbeer makes a romantic entry while playing the guitar. He tells Prachi that he wants her to express her feelings openly.

Rhea mutters that she cannot see Ranbeer with any other girl and decides to end her life.