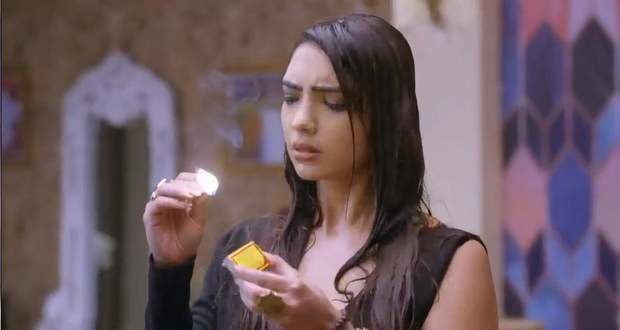 Today's Kumkum Bhagya 20 Oct episode starts with Aliya informing Abhi about Rhea’s bad mood. Daadi tells Abhi that Rhea locked herself in the room and asks him to talk to her once.

Ranbeer tries to share his feelings to Prachi, while Prachi scolds him for getting nervous. She asks him if he has told his parents about the proposal or not.

Ranbeer says that he will always tell his parents before leaving home. Shahana witnesses them from outside and seems happy on seeing them together as a couple.

Rhea decides to commit suicide, while Abhi knocks the door and shouts at Rhea to open the door. Rhea recalls all the moments when she felt no one loves her.

Abhi sees Rhea throwing Kerosene on herself and screams to not to take this step. All the family members come out Rhea’s room and Abhi tries to break the door.

He gets into the room and Rhea sets herself on fire. She screams for help and Abhi puts on the blanket on her.

He rushes Rhea to the hall and takes her to the hospital. Meanwhile, Prachi pulls Ranbeer’s leg and Shahana tells Ranbeer that Prachi is doing drama in front of him.

Ranbeer kneels down and gifts a diamond ring to Prachi, while Prachi says that she cannot take the ring.

Abhi cries out a loud on thinking about Rhea’s attempt to suicide. Aliya tells him that she knows the reason for Rhea’s suicide attempt.

She tells him that Prachi ditched Rhea by stealing her love Ranbeer. She takes the advantage of the situation and tries to provoke Abhi against Prachi.

She tells everyone that Prachi took the help of Maya to trap Ranbeer. She shows a video to everyone about Maya confessing that Prachi asked her to file molestation case against Ranbeer.

© Copyright tellybest.com, 2018, 2019, 2020. All Rights Reserved. Unauthorized use and/or duplication of this material without written permission from tellybest.com is strictly prohibited.
Cached Saved on: Tuesday 1st of December 2020 02:14:50 AM