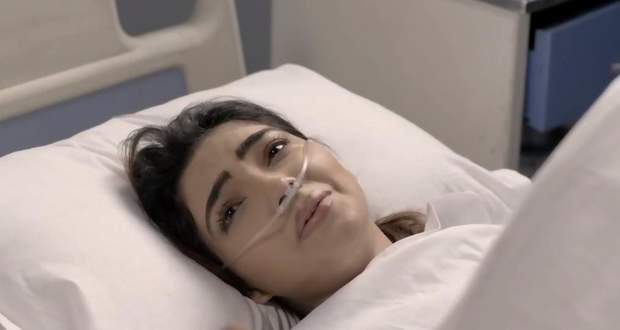 Today's Kumkum Bhagya 22 Oct episode starts with Prachi getting a call from Pragya. Shahana asks Prachi to not to tell Pragya about Rhea’s suicide attempt.

Pragya questions Prachi about her decision regarding her marriage. Prachi tells her that she has no problem with getting married to Ranbeer.

The doctor informs Abhi that Rhea is out of danger and she has gained consciousness. Abhi asks for permission to meet Rhea and the doctor allows him to meet her.

Pallavi scolds Ranbeer for taking a stand for Prachi, while Ranbeer tells her that he never loved Rhea. Pallavi gives a final decision to him that he will only get married to Rhea.

She takes Ranbeer to Rhea’s room to show Rhea’s condition to him. Meanwhile, Abhi leaves from the hospital and recalls when he met Rhea.

Rhea cries in front of Abhi to take her home and apologises to him for taking such a big step. Abhi asks Rhea to think once how he would live without her.

Rhea gets unconscious while talking to him and Abhi rushes to the doctor to check her. Aliya blames Abhi for being selfish on thinking about his daughter’s broken heart.

She brainwashes Abhi against Prachi and asks him to prove Rhea that he really cares for her. Further, Mitali tells Aliya that she has not used the right time to talk Abhi about Prachi.

Aliya says that she was just trying to take a stand for Rhea, while Daadi also tries to make her understand that she has not done the right thing.

The doctor tells Mehra’s that Rhea gained consciousness and Aliya rushes to see her. Pallavi brings Ranbeer near to Rhea’s room and asks him to see Rhea’s bad condition.

Aliya brainwashes Rhea that Ranbeer will surely get married to her and Prachi will be left alone. Rhea questions her that what she has done to get Ranbeer away from Prachi.

© Copyright tellybest.com, 2018, 2019, 2020. All Rights Reserved. Unauthorized use and/or duplication of this material without written permission from tellybest.com is strictly prohibited.
Cached Saved on: Wednesday 2nd of December 2020 06:01:25 AM