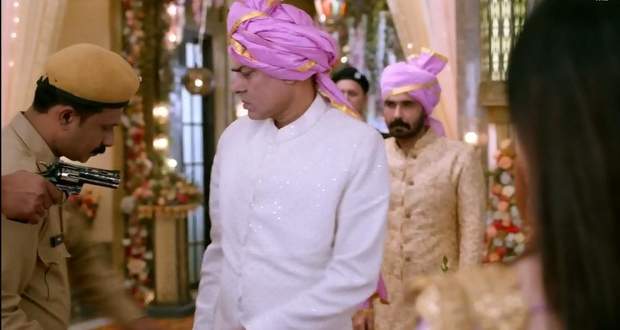 Today's Kumkum Bhagya 23 Sep episode starts with Abhi reaching the hospital to see Riya after her accident. The doctor informs Abhi that Riya is out of danger and tells him that it was a minor accident.

Pragya hugs Prachi and the police officer asks her the reason for not letting Prachi to get arrested. Pragya informs the inspector that Prachi was helping Ranbir’s family as Dushyant was forcefully getting Ranbir and Maya married.

Sarita stands in favor of Pragya and informs everyone that Dushyant threatened her family. Pallavi reveals that Maya’s mother warned that she will destroy her family if they didn’t let Ranbir marry Maya.

Maya shows the marks on her hands and informs the inspector that Prachi tied her with a rope. She says that Prachi is a middle-class girl and she loves Ranbir’s money.

Pragya asks Maya to shut her mouth, while the police inspector speaks in favor of Maya and tells Pragya that they have to take Prachi to the police station.

Prachi gets a message on her phone and reveals that Maya has a boyfriend whose name is Rahul. Aryan brings Rahul to the mandap, while Prachi asks him to reveal his relationship with Maya.

Elsewhere, Aliya informs Riya that Madan kidnapped her assuming her to be Prachi. She tells Riya that Prachi sat in the mandap with Ranbir but Maya halted the marriage.

The lady advises Abhi to file a complaint against the goons who were following Riya. He questions Riya about the goons, while Riya informs him that no one was following her.

Ranbir tells everyone that Maya was planning to divorce him after getting all his money. Maya denies identifying Rahul, while Rahul questions her about their love.

Aliya informs Abhi that she didn’t inform Meera about Riya’s accident. Later, Abhi expresses his love for Riya and she gets emotional on having such a loving father.

Dushyant shoots Rahul on his hand and Maya rushes to see him. Maya reveals her love for Rahul to everyone and files a complaint against her family for forcefully getting her married to Ranbir.