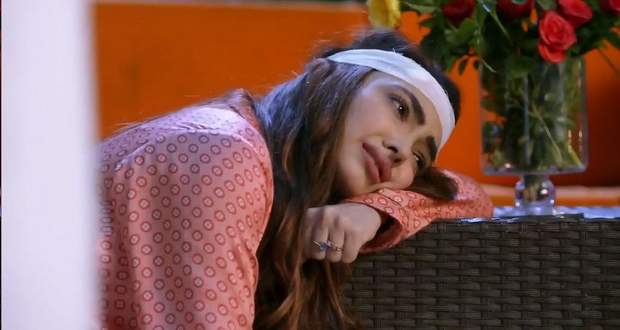 Today's Kumkum Bhagya 24 Sep episode starts with Abhi getting a call from Ranbir and he informs Abhi that his marriage got canceled.

Beeji expresses her desire to get a daughter-in-law like Prachi. Vikram supports her wish and asks her to talk to Ranbir if he is ready to get married to Prachi.

Meanwhile, Pragya scolds Prachi and Shahana for not thinking about the consequences of their action. She tells them that thankfully Rahul came at the right moment otherwise Dushyant would have shot Prachi.

Prachi apologizes to Pragya for her mistake, while Sarita tells her that Prachi did all this for her love Ranbir. Elsewhere, Rhea starts crying at the terrace after overhearing the Ranbir family’s conversation.

She mutters in anger that she hates Prachi for spoiling her life, while Ranbir and Aaryan arrive at the terrace. Aaryan asks Ranbir about his plan to propose Prachi for marriage.

Aaryan gets a beer for Ranbir but he denies drinking and gives a reason that Prachi doesn’t like it. Later, Ranbir enters Prachi’s room through the window and Prachi scolds him for coming late at night. Ranbir tells her that he wants to talk to her about something important.

Pragya expresses her thoughts with Sarita that Ranbir’s family wants a daughter-in-law who belongs to their financial status and Prachi doesn’t belong to it. Sarita advises Pragya to get in contact with Prachi’s father so that he can handle the situation.

On the other hand, Rhea gets drunk and makes a call to Aliya and tells her that no one loves her. Aliya goes on the terrace and scolds Rhea for getting drunk.

Rhea tells her that she is fine and she doesn’t need anyone in her life now, while Aliya goes to the kitchen to get something to help Rhea in getting out of her hangover.