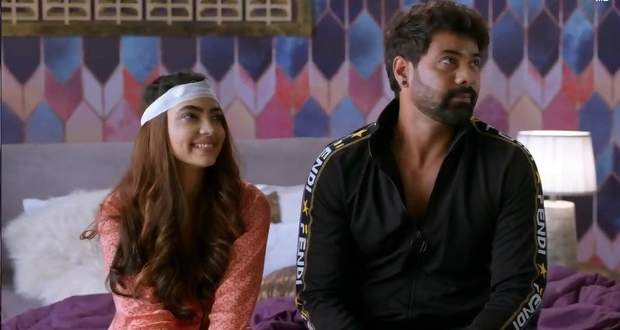 Ranbeer questions Prachi if she will accept him in her life or not. Prachi says yes to him and Ranbeer tells her that he brought something for her.

Prachi assumes that Ranbeer is going to propose her, whereas Ranbeer gives a friendship band to her and feels grateful to her for always supporting him in his life.

Prachi gets silent after hearing Ranbeer’s words, while Ranbeer tells her that he knows that what is going on in her mind. Meanwhile, Rhea comes downstairs from the terrace, and Abhi witnesses her in a drunk state and takes her to her room.

Rhea feels heartbroken and informs Abhi about her love for Ranbeer. Abhi questions her if she loves Ranbeer wholeheartedly and tells her that no one can take Ranbeer away if Ranbeer also loves her.

Rhea warns Abhi that she will commit suicide if she doesn’t get Ranbeer in her life. Abhi scolds her for talking rubbish and gives a promise to her that he will talk to Ranbeer’s family about their marriage.

Aliya overhears their conversation and mutters that Abhi is going to hurt his second daughter in exchange for giving happiness to Rhea.

Shahana and Sarita enter Prachi’s room, while Prachi thinks that Ranbeer was not in her room and it was just her imagination. Shahana sees Ranbeer below the bed and helps him hiding from Sarita.

Rhea gets in a good mood and Abhi promises her that he will talk to Vikram once he returns from his business trip. Aliya informs Rhea that Ranbeer is planning to propose Prachi for marriage.

The next morning, Pallavi rushes to Abhi and asks him to help her. Abhi follows her and witnesses his Daadi standing in front of him.