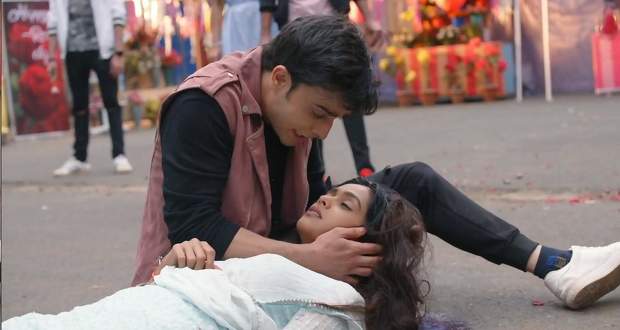 Today's Kumkum Bhagya 28 Sep episode starts with Abhi getting excited about meeting his Daadi and other family members after a long time. Vikram reveals that it was his plan to give a surprise to Abhi.

Ranbeer greets everyone and then leaves for his college, while Shahana teases Prachi for meeting Ranbeer late at night and bets that Ranbeer will definitely propose her in the college.

Rhea plans to kill Prachi’s chapter and gives money to goons to hit Prachi through a truck. Meanwhile, Ranbeer gets a rose bouquet and a card to propose Prachi at the college gate.

Prachi reaches college along with Shahana and witnesses Ranbeer standing at the gate. They both get lost into each other and Rhea orders the goons to hit Prachi right at that moment.

Prachi and Ranbeer move towards each other and the goons hit Prachi leaving her severely injured. Ranbeer stands still in a shock and rushes to see Prachi.

He starts crying badly and begs her to open her eyes, while Rhea decides to leave from there in her car and Ranbir asks her to give them a lift to the hospital.

Shahana makes a call to Pragya and informs her about Prachi’s accident. Elsewhere, Ranbeer and Shahana take Pragya to the hospital, while Rhea hugs Ranbeer on witnessing him so hurt.

Ranbeer calls Abhi and informs him about Prachi’s accident. He tells Abhi that he remembers the truck number and asks him to help in filing a complaint against the truck driver as soon as possible.