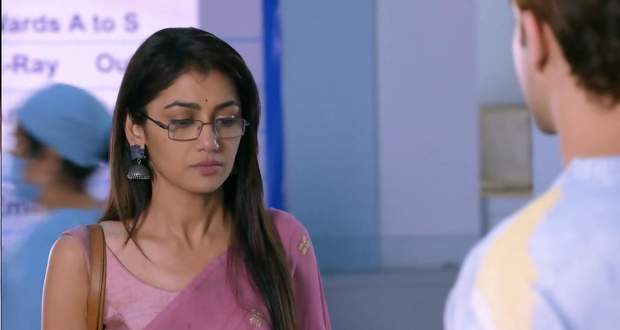 Today's Kumkum Bhagya 30 Oct episode starts with Pragya getting emotional on witnessing Rhea’s critical condition in the hospital. She says that she loves both of her daughters and requests Rhea to get up.

Ranbeer decides to make it clear to Rhea that he loves Prachi a lot and witnesses Pragya meeting Rhea in the ICU ward.

Pragya leaves from there and Rhea says Maa on getting up. She thinks that it was her illusion that Pragya came to meet her.

Pragya asks Ranbeer to not to tell anyone that she came to meet Rhea. He then makes a call to Prachi and she tells him that she is searching for her mother.

Ranbeer says that he saw her mother outside City hospital, while Abhi sees Prachi trying to get a lift on the road.

He goes to meet her and gets emotional in front of her. Prachi apologizes to him for her mother’s harsh words.

Abhi asks Rhea that he will give her a lift to the hospital. Later, he mutters that Pragya has to inform Prachi about his relationship with her.

© Copyright tellybest.com, 2018, 2019, 2020. All Rights Reserved. Unauthorized use and/or duplication of this material without written permission from tellybest.com is strictly prohibited.
Cached Saved on: Thursday 26th of November 2020 09:01:44 AM