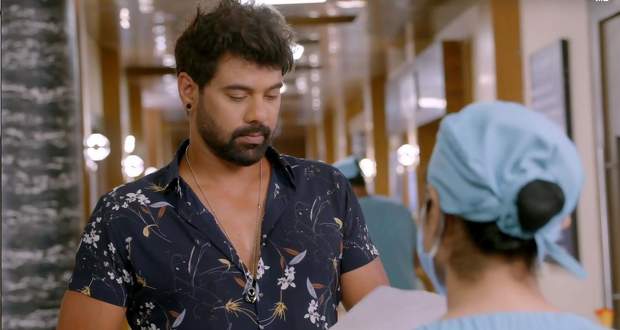 Today's Kumkum Bhagya 30 Sep episode starts with Daadi saying that she wants to fulfil her sister’s wish to unite Abhi with Pragya. She says that Pragya saved her once when the fire broke down in the house.

Aliya overhears Daadi’s conversation and tells her that it was Abhi who saved her. Meanwhile, Abhi reaches to the hospital and asks Ranbeer about Prachi’s condition. Ranbeer informs him about Prachi and says that he is going to the police station in Rhea’s car.

The goon waits for Rhea outside the hospital to give him money for their contract. Rhea gives him money and asks him to leave from there.

The goon asks her to give more money and Rhea gives her diamond ring to him. She then gets a call from Aliya and she asks Rhea to come back home in a taxi.

Ranbeer witnesses the truck which hit Prachi and follows it in Rhea’s car. He makes a call to Aaryan to help him in catching the truck driver.

Abhi sees Prachi in a serious condition and gets emotional on recalling his memories with Prachi. He calls the doctor and questions him about Prachi’s health.

The doctor informs him that Prachi’s family will not be able to bear the expenses of the hospital, while Abhi promises him that he will pay the bills for Prachi’s treatment. Later, he asks the receptionist to give him the bill so that he could pay to the hospital.

Rhea reaches home and informs Aliya that he paid the money to the truck driver and he might be underground now.

Ranbeer follows the truck which hit Prachi, while the truck driver drops his man in the way. Further, Sarita gives her money to Pragya to pay the bills of the hospital.

Pragya gets emotional and hugs Sarita for helping her, while the receptionist informs Pragya that someone already paid Prachi’s treatment bill.