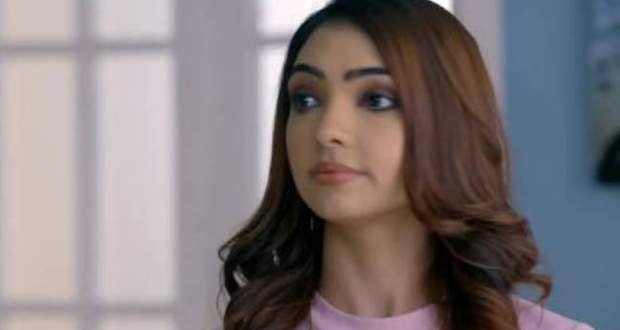 Kumkum Bhagya 6 Oct episode starts with Rhea getting a call from her friend and she enters a room. Pragya follows her and says that she loves her daughter.

Rhea disconnects the call and tells Pragya that she knows that she is worried about Prachi. She tries to comfort Pragya by saying that she will become her daughter if anything happens to Prachi.

However, she is snapped by Pragya who says that no one can take Prachi’s place in her heart. Pragya starts rebuking Rhea for always creating trouble in Prachi’s life.

She further adds that she has misunderstood Mr. Mehra and that he was only trying to improve his daughter. On hearing this, Rhea loses her cool and says that she did everything to remove Prachi from her life.

Sarita also condemns her and she finally admits that it was she who planned Prachi’s accident. Pragya is enraged and slaps Rhea.

Furthermore, Rhea says that Prachi is her Dad's favorite and she can not bear it. She also tells Pragya that she did everything to throw Prachi out of her life.

Pragya questions her about her misdeeds and she confesses everything from her secreting keeping her necklace in Prachi's pocket to her defaming Prachi at the Diwali party. She tries to cover her wrongdoings by telling Pragya that she doesn't like Ranbeer and her Dad taking Prachi’s side every time.

On the other hand, Ranbeer is worried about Prachi’s condition and tells Aryan about the same. Shahana asks Ranbeer if the truck driver has revealed anything and he tells her that Pragya is interrogating him.

At the same time, Pragya tries to explain to Rhea that Prachi is a good person and being kind-hearted is not a crime. However, Sarita is enraged and starts affronting her.

Rhea also starts speaking to Sarita abruptly and Pragya gets shocked to see this. Sarita insults her by saying that there are no similarities between her and Prachi. She moreover says that her behavior is the reason behind her mother leaving her.

Pragya tries to stop Sarita while Rhea starts belittling her. Pragya gets furious at Rhea and asks her to leave. Pragya is very dejected and Sarita comforts her.

Elsewhere, Rhea gets very upset after Sarita’s insult and starts driving recklessly. As a result, her car hits a wall.