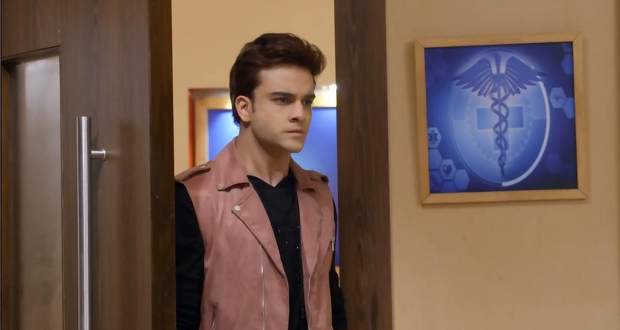 Today's Kumkum Bhagya 9 Oct episode starts with Prachi asking Sarita to tell her about the person responsible for her accident. Sarita reveals to Prachi that Rhea is responsible for all the bad things that happened in her life.

Ranbeer overhears their conversation and rushes from there in anger. Meanwhile, Rhea cries a lot and apologizes to Prachi’s picture for all her evil deeds.

She decides to inform Abhi about everything so that they both can take Pragya and Prachi to their home.

Prachi gets up from the hospital bed and screams at Ranbeer to not to take any action against Rhea. The nurse informs Prachi’s family that they can take Prachi to home.

Later, Rhea reaches her home and goes to Abhi’s room to inform him about Pragya. She doesn’t find Abhi there and brings out the family album from the almirah.

Daadi comes there and informs her that Abhi has slept after taking medicine. Elsewhere, Prachi is discharged from the hospital and her family takes her to the home.

Ranbeer holds Prachi’s hand and helps her in walking to the room. Sarita tells Pragya that Ranbeer and Prachi love each other.

Aliya informs Rhea that she has arranged her abroad trip till the situation gets fine. Rhea asks Aliya if she knows that Abhi has never met Prachi’s mother.

Aliya answers her that she doesn't know if Abhi has met Prachi's mother. Rhea then tells Aliya that she knows that Pragya is her mother and Prachi is her elder sister.