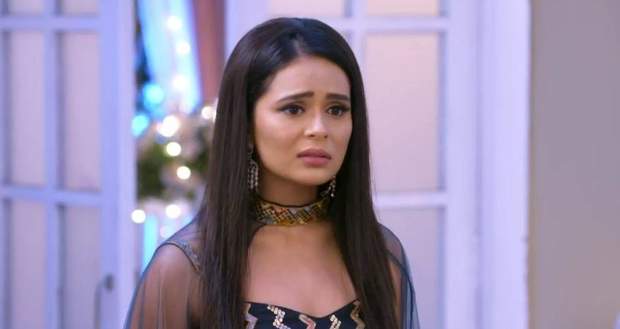 Today's Kundali Bhagya 10th August 2022 episode starts with Anjali scolding Arjun for drinking too much and telling him that he has said and done so much while he was drunk.

Anjali tells him that he has confessed his love for Preeta as well as proposed to her too.

Arjun feels agitated for being so stupid.

After a while, Arjun asks Anjali what has Preeta replied when he proposed to her.

Anjali tells her that Preeta has pushed him which makes Arjun angry.

Anjali also tells him that she has told Preeta that Arjun proposes to girls when he is drunk.

Arjun is not happy with Anjali’s response and tells her to go and clear the misunderstanding that she has created.

Meanwhile, Prithvi gangs up with Raja and the goons and tells a false story of Rishabh’s betrayal in business.

After a while, the goons take out the guns and are about to leave the kitchen when Sonia comes in looking for Kavya and tells Prithvi that Kavya is Rishabh and Preeta’s daughter.

Vishnu tells Raja that this means that Kavya is Arjun’s daughter while Raja is not convinced.

After a while, Raja decides to question Arjun and Rishabh about their relationship.

Meanwhile, Rishabh takes Preeta to a corner and asks her what she has to say to him.

Just then, Arjun comes in and tries to give an explanation to Rishabh.

Rishabh cuts him in the middle while Kareena comes to invite them for the cake cutting.

Prithvi smiles seeing the family happy while making plans to ruin their party.

Meanwhile, Prithvi is grabbed from the side by Sherlyn while the goon follows them into the room.

Sherlyn asks Prithvi what is he doing at the party while Prithvi tells her that he has come to kill Preeta and Rishabh at their anniversary party.

Meanwhile, Rishabh tells Preeta that Tapsee Pannu is coming to the party and he is going to collaborate with her.

Just then, Arjun falters in his steps while Preeta holds his hand and stops him from falling.

Later, Arjun tells her that she often proposes to girls he does not like when he is drunk and asks her not to take it too seriously as she is not her kind.

In the meantime, Prithvi is explaining to Sherlyn how he became the boss of the goons when Mohan comes in and recognises Sherlyn.

Just then Vishnu hits him on the head and renders him unconscious.

After a while, Kavya comes in looking for Mohan and introduces herself to Prithvi.

After Kavya leaves, Prithvi tells Sherlyn that Kavya is Karan and Preeta’s daughter.

© Copyright tellybest.com, 2020, 2021. All Rights Reserved. Unauthorized use and/or duplication of any material from tellybest.com without written permission is strictly prohibited.
Cached Saved on: Saturday 1st of October 2022 09:05:50 PMCached Disp on: Sunday 2nd of October 2022 11:23:57 AM