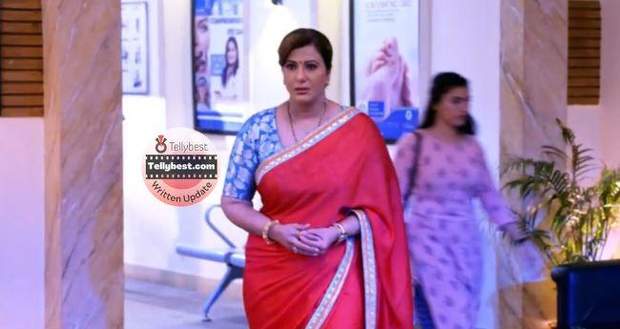 Today's Kundali Bhagya 10th January 2023 episode starts with Rakhi trying to remind everyone and Preeta about Panditji who said that Karan is alive and that they should not put garland on it.

Preeta says she remembers it and Rakhi emphasizes that Karan is alive.

Mahesh tries to calm Rakhi down and says that Karan is no more.

Rakhi says that Arjun is Karan and she could feel it in all the moments when he was close to her and asks everyone to trust in her.

Rakhi then goes to Bani and asks her whether she could not recognize Karan in Arjun while Bani says that Arjun helped her but that does not make him Karan.

Rakhi tries to remind Bani that out of all the people Arjun came to help her grandmother because he cares for her.

Later, she goes to Kritika and tries to remind her that Arjun saved her from the goons and Kritika also said in the past that she sees Karan in Arjun.

Kareena tries to prove that Arjun helped Kritika out of humanity.

When Rakhi asks Kareena if she sees Karan in Arjun, Kareena denies it straightforwardly.

After some time, Rakhi moves to Sameer to ask his opinion and he says that he feels Arjun is Karan which fills Rakhi's face with happiness.

Meanwhile, Arjun reaches the Luthra Mansion and he feels his family is calling him and he will get everything that he lost.

Inside the house, Mahesh tries to contradict Rakhi and Sameer but Rakhi asks him not to suppress them.

Mahesh says that if Arjun had been Karan he would have called him "Dad" and Rakhi "Mom" while Rakhi stresses that Arjun actually called her mother.

Bani tries to sympathize with Rakhi and Mahesh asks his mother not to do that because it would affect Rakhi's mental health.

However, Kareena brings to light how Arjun tried to kill Rishabh and how Prithvi exposed him.

Rakhi argues that Bani believes a goon like Prithvi and also asks Preeta if she remembers how Arjun saved Rishabh by donating his blood to him.

Kritika recalls how Kavya got into danger because of Arjun but Rakhi has a counterattack for it.

Rakhi tells how Arjun saved Kavya from the terrorists in the school and later on the plane.

She also tells how Arjun put the password in the locker to rescue Kavya as he is Karan.

Meanwhile, Arjun is walking inside with a nostalgic feeling as if he is coming back to his house.

Rakhi asks Preeta what a person says to a doctor when he is injected when everyone says they will ask him not to do it.

However, Arjun said he will sue the doctors, his arteries might get blocked, and then the doctors will go to jail in an attempt to murder.

Bani tries to subside it saying it might be a coincidence but Rakhi brings out the album which has Karan's childhood photos and shows the birthmark.

When Rakhi tries to compare the same birthmark with that of Arjun, Kareena says it is because of the stress she is going through.