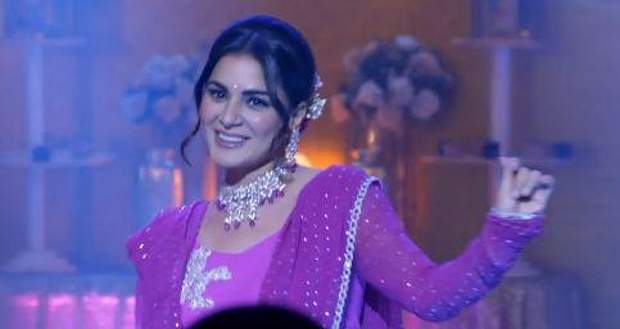 He calls his people to take care of Preeta while Preeta recovers and uses Prithvi’s knife to scare him.

Fearing exposure, Prithvi asks Preeta to keep his secret in front of others.

However, Preeta calls him a coward and shames him for attacking her from behind.

Later, Sherlyn finds Natasha with unconscious Shrishti in a room and compliments her for doing the job well.

After a while, Sherlyn spots Preeta going towards the party and worries about Prithvi.

At the party, Karan asks Sameer about Preeta while Sameer teases him for missing Preeta.

Seeing Preeta come inside, Karan questions her whereas Preeta shares an emotional moment with Karan.

Before Karan could leave, Preeta holds Karan’s hand and ask Karan for a dance which he happily obliged.

Afterward, Mahesh and the rest of the family enjoy a duet between Preeta and Karan while they lose themselves in each other.

Unable to find Shrishti anywhere at the party, Sameer goes in search of her.

During their argument, Prithvi loses his temper and in his rage kills Sherlyn without realizing it.

Later, Sameer enters Shrishti's room looking for her while Natasha hides in the cupboard.

Seeing the cupboard door open Sameer moves toward it to investigate.