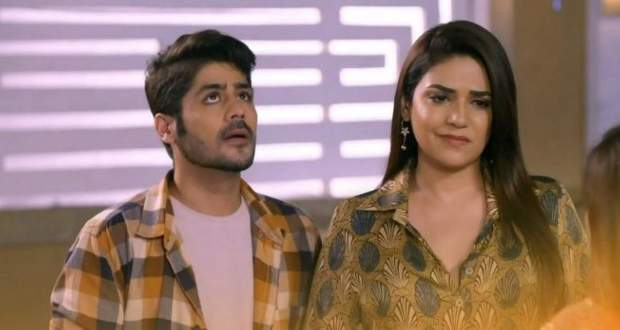 Today's Kundali Bhagya 10th May 2022 episode starts with the hotel manager giving Preeta a hard copy of the footage.

Just then he spots Prithvi behind the tree and warns Preeta.

Seeing Prithvi, Preeta runs away from him to reach court.

Meanwhile, Karan's court proceedings are in play at the court and the prosecutor is presenting evidence to the court while Karan defends himself.

So far no strong proof is presented by Karan’s lawyer and their case gets weaker and weaker.

Elsewhere, Prithvi is looking for Preeta who is hiding behind bushes.

Afterwards, Preeta comes out and runs again but Prithvi catches her.

But before Prithvi can take her evidence Preeta tricks him to fall and escapes in her car while Prithvi follows behind.

Prithvi blocks Preeta’s car from the front and decides to kill her.

In the meantime, the lawyer cross-questions Karan and shows Sandesh's picture with Karan’s duplicate.

Karan denies being in the photo but the judge dismisses his testimony.

On the other hand, Prithvi and Preeta recover consciousness.

Prithvi again attacks Preeta with the intent to kill her but Preeta hits him hard with the paper roll holder.

Later, she puts him in her dicky and carries him towards the court.

In court, Karan’s lawyer asks the prosecutor to present Sandesh who is a convicted criminal and is not rich therefore someone else is pulling his strings and trying to trap Karan.