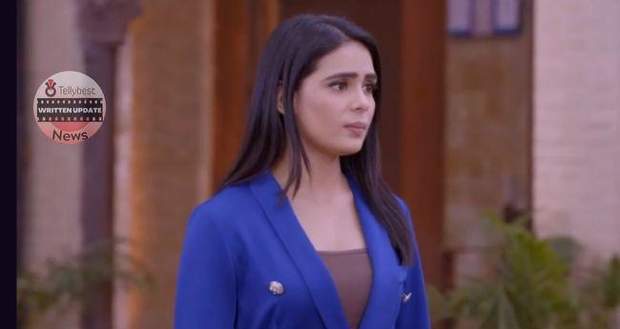 Rakhi tells her that Preeta and Rishabh are worried for Kavya because they are her parents whereas Arjun's loves for Kavya surprises her.

Dadi tells her that Arjun has saved Kavya today bravely and loves kavya like a daughter.

Rakhi is worried that Preeta does not like Arjun, so she is also keeping her distance from him.

Meanwhile, Arjun tells Preeta that he has not planted Raja in the school.

However, Preeta remains unimpressed and tells him that she does not care whether he sent Raja or not but it is because of him that Kavya was in danger.

Preeta tells him that this restraining order is permanent and he should heed it to keep away from Kavya as he is a danger to her.

However, Arjun tells her that he will not keep away from his daughter nor will he abide by any restraining order.

Preeta corrects him from calling Kavya his daughter and tells him that from now on all consequences for breaking the law will be their responsibility.

Arjun shouts in frustration and throws away the chair after Preeta and Rishabh leave.

Arjun tells Anjali that he will see how Preeta keeps Kavya away from him.

He vows to compel Preeta to come to him with Kavya.

Outside Arjun’s house, Preeta thanks Rishabh for his unconditional support while Rishabh tells her that he understands her well and knows she will never do anything wrong.

Meanwhile, Arjun is fuming in anger and thinking about Preeta’s warning.

Later, Preeta is preparing for bed when she sees Karan’s photographs.

Meanwhile, Anjali comes to Arjun asking him what is worrying him.

Arjun tells him that he will not forgive Preeta and marry Preeta again to get Kavya and now he will end all their conspiracies and get everything back from her.

Later, Preeta informs Rishabh that she will be sleeping with Kavya.

Seeing Preeta so restless, Rishabh resolves to take action against Arjun if he does anything beyond this.

Later, Arjun has a nightmare where Preeta recognised him as Karan but Rishabh takes Preeta away.

Anjali comes to comfort him but Arjun sends her away and stares at Preeta’s photos and tells her not to force him into treating her poorly.

Meanwhile, Preeta imagines Karan calling her and walks towards the voice.

Outside the room, she sees Karan standing in the shadows calling her.

As she closes the distance between them, someone grabs her from behind and forces her back.

Preeta wakes up with a start and Kavya comforts her saying she is there to look after her.

Preeta feels grateful for Kavya’s presence and calls her, her strength and delight.

The next morning, Preeta receives a call from an event company informing her that Rishabh has been selected for the best business leader award.

Hearing the news everyone becomes happy and Mahesh starts to dance.

© Copyright tellybest.com, 2022, 2023. All Rights Reserved. Unauthorized use and/or duplication of any material from tellybest.com without written permission is strictly prohibited.
Cached Saved on: Monday 21st of November 2022 03:28:35 AMCached Disp on: Wednesday 7th of December 2022 03:04:36 PM