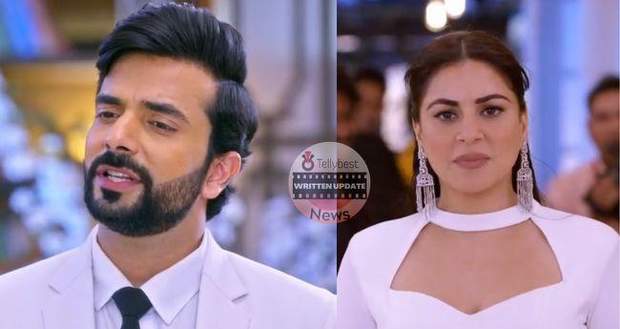 Today's Kundali Bhagya 10th October 2022 episode starts with the goons testifying to the Luthras that Arjun has contacted them for killing Rishabh.

Arjun goes to explain to Rakhi but she stops him vehemently asking him about his intentions of killing her son.

Mahesh, Sameer, Kareena, Kritika and Dadi all shame Arjun for his vile act and how he has betrayed their trust.

Arjun tries to explain but nobody lets him speak.

Just then Preeta comes forward and slaps Arjun for daring to kill Rishabh who is her husband and Kavya’s father.

Arjun gets angry at Preeta calling Rishabh her husband and holds her hand in anger.

Rishabh gets angry and frees Preeta’s hand from Arjun and calls security to throw him away.

Arjun gets angry and tells Preeta that he will tell her the truth.

However, Prithvi comes in between and tells him that his truth has come out and now everyone knows that he is a backstabber.

Arjun asks the goon that he will give them ten lakh rupees if they throw Prithvi out of the house.

Prithvi laughs mockingly at Arjun for believing that Raja and Vishnu will do his bidding.

However, Raja and Vishnu capture Prithvi and drag him out of the house while Prithvi calls them greedy and disloyal.

Afterwards, Rakhi slaps Arjun and questions him about his reason for attempting to kill Rishabh and reminds him of his promise of keeping Rishabh safe.

Rakhi tearfully tells Arjun that Rishabh is all that is left of him and that she will die if anything happens to him.

Rishabh cannot bear Rakhi’s tears anymore and asks her to not waste her words on Arjun and come inside.

Arjun tells Rakhi that he has kept his promise and never tried to kill Rishabh.

Mahesh drags Arjun at the door and tells him that he has hurt him the most.

Arjun is disheartened at his family’s alienating behaviour and tells them that they do not know What Rishabh has done to him.

Later, Arjun calls out to Preeta intending to talk to her but Rishabh comes in between and tells him to leave.

Arjun gets aggressive with Rishabh and pushes him away saying that he will talk to Preeta.

Arjun even picks up a chair to hit Rishabh in anger when Preeta stops him.

Afterwards, Arjun leaves the home in anger calling for Prithvi.

The goons tell him that Sherlyn helped Prithvi escape.

Arjun leaves in his car while Anjali calls after him.

Later, Rakhi is expressing her distress to Mahesh at being betrayed by Arjun and once again losing Karan.

Meanwhile, Rishabh is standing alone in his room and thinking about Arjun’s words and Preeta’s warning.

Seeing Preeta come in, Rishabh apologises to her while Preeta tells him that he has nothing to apologise for.

After a while, Preeta explains to Rishabh that although Arjun has saved Kavya and him yet his actions are criminal and he cannot be trusted because of that.

© Copyright tellybest.com, 2022, 2023. All Rights Reserved. Unauthorized use and/or duplication of any material from tellybest.com without written permission is strictly prohibited.
Cached Saved on: Monday 21st of November 2022 06:53:50 AMCached Disp on: Wednesday 7th of December 2022 03:24:39 PM