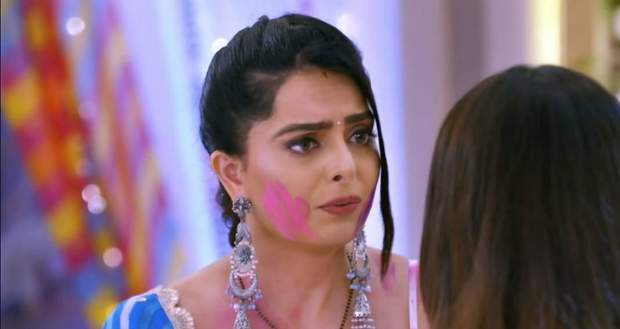 Janki and Biji are fighting under the influence of ‘Bhang’ while Shrishti tries to solve the issue.

Karan tells her that he was only trying to make her jealous. They start to fight while talking in a loop about the same issue.

Both Karan and Preeta look happy and inhibited while doing the pillow fight.

On the other hand, Natasha is searching for Karan while cursing PM and Nagre for distracting her.

In the meantime, Karan and Preeta continue to play and dance with each other in Preeta’s room.

Karan gets hit by the ball while Preeta calls the doctor, but Karan says that he is only playacting.

Preeta opens the door and insults her and Karan follows suit and insults Natasha as well before shutting the door in her face.

Sherlyn is looking for Karan when she finds Natasha at Preeta’s door.

Natasha tells Sherlyn that Karan is with Preeta which surprises Sherlyn and she tries to get Karan out of the room, by knocking.

As Karan and Preeta open the door, Natasha tries to drag Karan out of the room while Preeta drags him inside.

Later, Karan pulls himself away and they again lock the door.

At the police station, Prithvi is making plans to go to Luthra's house while being overconfident about his welcome.

At the Luthra house, Karan is apologising to Preeta while Preeta tells him not to waste his time.