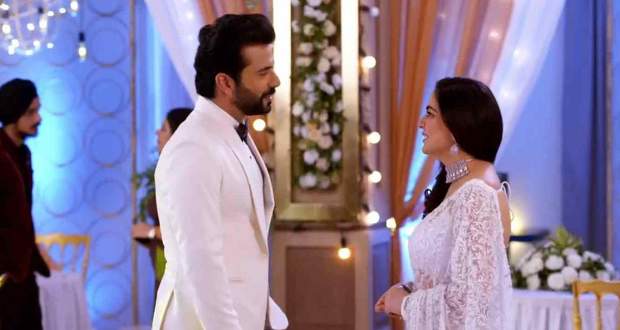 Today's Kundali Bhagya 11th August 2022 episode starts with Rishabh talking on the phone and tells Sameer that Tapsee Pannu is coming to the party.

Sameer gets excited and goes to freshen up as she is her favorite star. Shrishti observes Sameer’s haste and follows him.

However, Biji stops her in the middle and tells her to get the cake.

Shrishti tries to excuse herself but Biji becomes stubborn and tells her to go without delay.

Meanwhile, Anjali is searching for Arjun when he comes in and tells her that he has clarified the misunderstanding with Preeta while wondering what has she seen in Rishabh.

Anjali thinks it might be Rishabh's goodness while Arjun is convinced that Preeta married Rishabh for his money and that she was having an affair behind his back.

Meanwhile, Shrishti comes in and ropes Arjun into helping her leaving Anjali alone.

In the meantime, Raja questions Sherlyn about Mohan knowing her before while Sherlyn tells him that Rishabh was her ex-husband.

After that, Sherlyn shuts everyone down and makes the plan to rob the Luthras first and then take revenge on Preeta later.

On the way to the Kitchen, Arjun asks Shrishti about Rishabh and Preeta’s love marriage.

Shrishti becomes serious and tells him that Preeta has suffered a lot and has witnessed Karan’s death from her own eyes who was the love of her life.

She also tells him to not talk about this way ever about Preeta and that they all miss Karan a lot.

Seeing Shrishti in tears, Arjun hugs her and tells her not to worry as he is back but quickly makes an excuse.

On the other hand, Anjali collides with the chair and balances herself in time to avoid the fall.

Preeta comes to her assistance and apologises to Anjali.

Anjali asks Preeta about Rishabh’s reaction to Arjun’s proposal while Preeta changes the subject and asks Anjali to not tolerate Arjun’s ill-mannered and rude personality.

Anjali defends Karan and asks Preeta what has she seen in Rishabh.

Preeta happily tells her that she has seen Rishabh’s goodness and his caring nature for others and fell in respect at first sight.

Anjali also tells Preeta that she can handle Arjun and that she likes working for him and is happy with him.

In the Kitchen, Shrishti asks Arjun to carry the cake to the party.

However, Arjun sees the anniversary logo on the top of the cake and makes it fall purposely in anger.

Shrishti panics at the loss of the cake while Anjali offers to arrange another cake after coming in.

© Copyright tellybest.com, 2020, 2021. All Rights Reserved. Unauthorized use and/or duplication of any material from tellybest.com without written permission is strictly prohibited.
Cached Saved on: Friday 30th of September 2022 07:15:21 PMCached Disp on: Saturday 1st of October 2022 05:23:29 PM