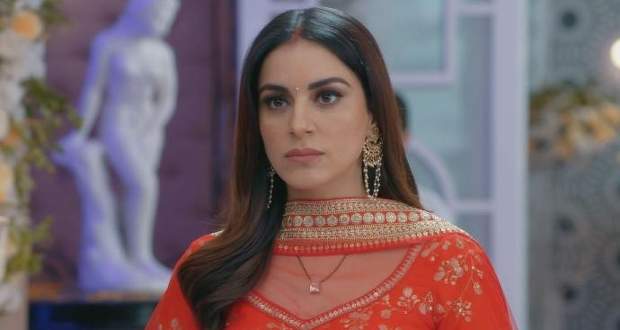 Today's Kundali Bhagya 11 February 2021 episode starts with Kareena telling Kritika to go to her uncle's house so that with the change of environment she can forget about the mishappening of a broken marriage.

Kritika disagrees that she is fine with everyone at the home but Kareena, Rakhi, and everyone stresses that she must go.

Rakhi goes along with Sameer go to drop Kritika at the airport. Kareena says that Preeta has made her daughter cry a lot, she has seen angry Kareena but now she will see the anger of a mother.

Preeta looks at the window and recalls how Karan came and gave her a rose on Valentine’s day.

Srishti wakes up and gives Preeta tea but she refuses. Srishti makes out from the tone of Preeta that must be thinking about Karan.

Karan changes the setting of the room and puts all the things in the room that were not liked by Preeta.

Karan goes for breakfast but Sameer says that his smile is gone with Preeta and Karan leaves without breakfast.

Dadi ma says that Preeta has taken all the happiness of this house along with her.

Preeta serves the breakfast and about to leave but Sarla holds her by her hand to have breakfast but Preeta runs to her room crying.

Preeta cleans a wardrobe, scolds Srishti for not doing any work but later on hugs and apologizes with Srishti that she is bursting out someone's anger on her.

Srishti calls Karan but he exclaims that he will send Preeta's belongings at home. Preeta says that he need not bother and she will take her belongings from Girish by herself.

Preeta yells at Srishti not to call Karan again. Srishti asks Preeta why she didn't talk to Karan properly, to which Preeta says that there is no need to talk nicely to people who are rude.

Preeta and Karan both are sad, both are not even accepting any help from their family members. Rakhi is trying hard to console Karan but in vain.

After a few days, Karan and Preeta are a bit normal. Preeta notices the window and asks why Srishti's room windows are locked.

Srishti replies that her mother did so because she always went out through this window only and her mother locked the window with the help of a carpenter with nuts and bolts.

Sarla comes to the room and asks Preeta if she can vent her heart out with her. She has brought her to this home for her betterment.

Preeta says that it is good that she did so, at least, one has to take this step because no one was trusting her in Luthra’s house and she was suffering silently.

Sarla says that she was happy when Preeta was coming close to her family members but she was not able to bear Preeta’s pain as everyone was against her.

© Copyright tellybest.com, 2020, 2021. All Rights Reserved. Unauthorized use and/or duplication of any material from tellybest.com without written permission is strictly prohibited.
Cached Saved on: Sunday 9th of May 2021 10:41:34 PM