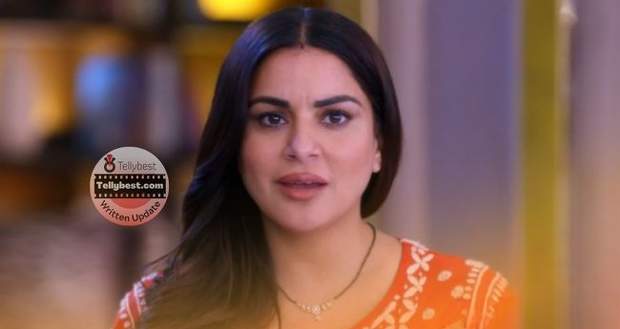 Today's Kundali Bhagya 11th January 2023 episode starts with Rakhi telling Mahesh if he suspects her about Karan then she will fight with him for the first time in 35 years.

Preeta cries with pain and tells Rakhi to not say such things.

Preeta stands silently recalling the moments when she also felt Arjun has Karan’s traits in him.

Just then Rakhi feels her son coming to the house and within seconds Arjun knocks on the door shocking everyone.

Arjun smiles to see everyone and moves inside with Rakhi’s suitcase while Rakhi looks at him with teary eyes.

Arjun breaks the silence telling Rakhi that their bags have gotten exchanged at the airport.

Seeing the unusual silence, Arjun asks them if something has happened or if Kavya is alright.

Sameer assures him of Kavya’s safety while Mahesh asks Arjun his parent's names.

Arjun looks shocked at the question but tells them the name while remembering their names.

Hearing the names, Mahesh and others look disappointed and tell Sameer to take the bag from Arjun.

He apologises to Arjun for not being able to ask him to stay as they are all drained.

Arjun senses something is wrong and asks them to tell him and he will surely try to solve it but Mahesh tells him that nothing is the matter.

Later, Rakhi stops Arjun and kisses both his hands, she tells him to live long by God's grace and always live with his family and mother.

Mahesh takes Rakhi away and shuts the door on Arjun.

Afterwards, Rakhi cries in pain and shouts at them to believe her that Arjun is her son and she can recognise him in 9 cr people.

However, Mahesh tells her that if that had been the case then he would have acknowledged them but he didn’t.

Rakhi once again tells them that Arjun is Karan and goes to her room feeling sad.

As everyone leaves for their room, Preeta spots Arjun’s bag and rushes to return it to him.

Arjun stops the car on seeing Preeta and comes out of the car telling her to be careful and not run.

Reaching Arjun, Preeta looks at him for a long time remembering Rakhi’s words.

Later, she hands over the bag to Arjun and their hands miss each other.

Preeta feels the touch and takes a step back while Arjun takes a step forward and puts Preeta’s hair behind her ears.

Arjun tells Preeta that he knows that something has happened.

Preeta tells him that her heart is fine and nothing happened to it.

However, Arjun tells her that he is talking about home.

Preeta feels awkward and turns away in a hurry denying Arjun’s guess.

Meanwhile, Rakhi tells Mahesh that he has disappointed her today the most by not believing in her despite the proof that she has given to them.

Just then Preeta’s dupatta gets torn under Arjun’s feet reminding her of Karan who has torn her dupatta’s similarly several times.

Preeta looks at him dauntingly and with tears in her eyes runs back inside while Arjun feels restless as he drives away.

In the meantime, Arjun to himself and tells Preeta that he is her Karan who has the power to increase her heartbeat and whose touch she can feel in a gust of wind.

© Copyright tellybest.com, 2022, 2023. All Rights Reserved. Unauthorized use and/or duplication of any material from tellybest.com without written permission is strictly prohibited.
Cached Saved on: Wednesday 25th of January 2023 10:28:07 AMCached Disp on: Wednesday 1st of February 2023 06:43:23 PM