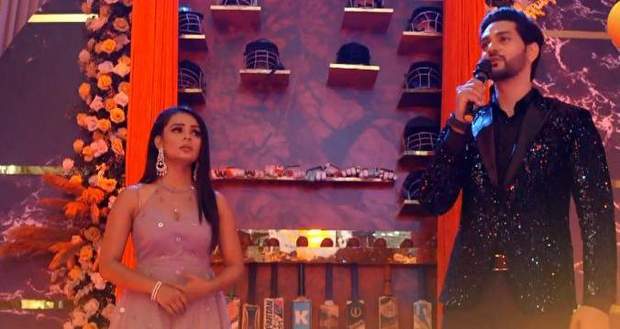 Today's Kundali Bhagya 11th July 2022 episode starts with Preeta thanking Rishabh while Karan corrects her and tells her that he is Karan's highest bidder.

Karan comments on her falling abilities while Rishabh gets angry at Karan for passing personal comments on Preeta.

Preeta remembers Karan saying something similar to her and admits to falling down often.

In the meantime, Sameer asks Shrishti if it's wrong to be married while Shrishti gets angry and accuses Sameer of having an affair with Anjali.

Sameer tries to tell her that he has no affair with Anjali.

After a while, Sameer remembers Karan while Shrishti tells Sameer that Arjun gave him a similar feeling as that of Karan.

Meanwhile, Karan tells Rishabh to buy good footwear for Preeta and goes to get a drink for him.

In the meantime, Shrishti corners Sameer and asks him about Anjali.

The couple starts arguing while Kareena comes to them and scolds them for fighting in the middle of the party.

She blames Shrishti for causing a scene and tells her to behave.

Meanwhile, Rishabh tells Preeta that Karan is being over-smart and it is not good while Preeta tries to say something and then stops abruptly.

Karan looks at Preeta and thinks about his announcement at 9:30 PM.

After a while, Shrishti tricks Sameer and takes his mobile while Anjali comments on their relationship.

Afterward, reporters surround Anjali to ask about Arjun’s private life while Anjali answers them in circles.

Later, Rakhi’s sandals slip and hit Karan who puts them back on Rakhi while being nostalgic about his past.

After a while, Rishabh tries to comfort Preeta who is feeling bad about Karan’s behavior.

However, Preeta tells him that only his dressing style reminds her of Karan else she is fine.

A while later, Karan is crying for not being able to call Rakhi her mom.

He tells Anjali that Preeta has taken his most important relationship from him.

Anjali tries to comfort her while Rakhi overhears Karan’s wish of hugging his mom and feeling her with him.

Just then Rakhi comes to Arjun and tells him that she also misses her son a lot and invites him to hug her and think of her as his mother.

Arjun cries at the travesty and hugs her while Mahesh comes and asks Rakhi what is happening there.

Rakhi returns Karan’s cufflink and tells Mahesh that she will explain later.

Later, Arjun tells Anjali that he does not want to be emotional but tough and wishes to give pain to Preeta.

© Copyright tellybest.com, 2020, 2021. All Rights Reserved. Unauthorized use and/or duplication of any material from tellybest.com without written permission is strictly prohibited.
Cached Saved on: Wednesday 10th of August 2022 11:19:11 PMCached Disp on: Monday 15th of August 2022 05:38:08 AM