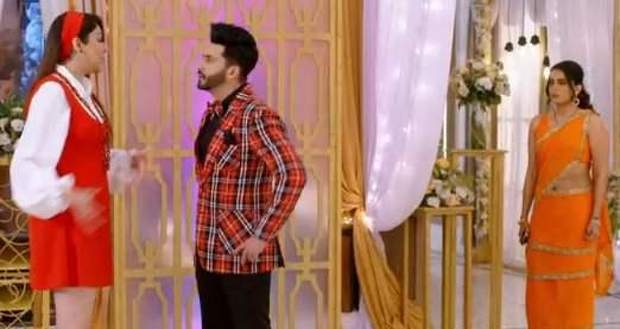 He wakes Shrishti and Natasha asking them about their condition.

Meanwhile, Prithvi is trying to wake Sherlyn and throws water on her which wakes her up.

However, Sherlyn pushes Prithvi away in anger and leaves.

Seeing Preeta and Karan dancing together, Shrishti sighs with relief and asks Sameer not to mention anything to Preeta.

Later, Karan invites Mahesh and Rakhi to dance while Prithvi is surprised to see everyone negligent.

At the same time, Mahesh jumps on Rakhi's necklace, attracting the attention of everyone including the Judge.

Prithvi and Karan take Mahesh away while the judge announces that Mahesh is still unwell and suggests they keep him away from family.

Preeta feels ashamed and disappointed in things going awry while Prithvi comes back informing everyone about handling Mahesh.

Feeling ashamed, Preeta takes the blame for everything for celebrating Mahesh’s birthday, while Rakhi informs everyone about her request to Preeta.

In her room, Preeta is crying thinking of the judge’s comments while Karan comes and scolds Preeta for not listening to her.

Karan also requests her to leave his family alone and takes her revenge only on him.

After a while, Dadi scolds Rakhi for believing in Preeta while Sameer speaks in favour of Rakhi.

At the same time, Kritika accuses Preeta for getting them into the mess despite Prithvi’s warning.