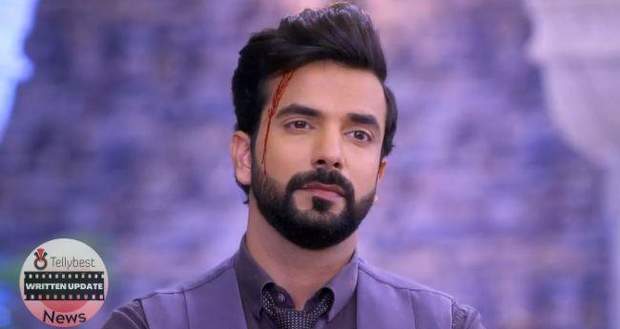 Today's Kundali Bhagya 11th November 2022 episode starts with everyone congratulating Rishabh while Rishabh tells Preeta that he is happy to see Preeta smile.

Meanwhile, Rakhi tells Preeta to not worry so much for Kavya as she is recovering nicely after the incident.

In the meantime, Anjali tries to cheer Arjun from her chit chat but Arjun remains sulking.

Seeing Rishabh and Preeta discuss going to the event office, Shrishti tells Sameer that Rishabh seems to fall more in love with Preeta while Sameer agrees with her.

On the other hand, Anjali gets a call from the same event management company to award Arjun with the Best Business Leader award and calls him to fill out the form.

Arjun is not very excited about the award but hopes that it will make Rishabh jealous.

Meanwhile, Rishabh and Preeta arrive at the event management office to fill out the form simultaneously with Arjun and Anjali.

Later, Arjun gets a call from someone and tells Anjali to carry on.

After a while, Preeta is shocked to see Anjali in the office too and questions the organiser for giving the form to Anjali as well.

Knowing that the award is for the joint venture, Preeta tells her to exclude them from the award.

Anjali also clarifies to them that they are no more partners but have become competitors now.

In the meantime, Rakhi is praying for the safety and happiness of her family when she begins to feel weird.

Elsewhere, the organiser informs them that this award has become competitive and will take place in two weeks and will be given to the one who performs the best.

Rishabh and Arjun accept the challenge and leaves the office.

Meanwhile, Rakhi is panicking and feeling scared thinking that something bad is about to happen to Karan.

Dadi feels pity for Rakhi and tells her that Karan cannot be in danger as he is with God.

Rakhi tells Dadi that Rishabh is in some kind of danger as she is having an intuition.

Dadi tells her to not worry as her mind is playing games with her.

However, Rakhi is overwhelmed and is missing Karan a lot.

In the meantime, Preeta gets a call from Kavya who wants to go to school.

Preeta tries to convince her to stay back for a while but later agrees to take her to school.

Arjun overhears Preeta’s conversation and tells Anjali that he has to meet with Kavya.

Anjali reminds him of the restraining order but Arjun is adamant and he wants to meet his daughter who is not well.

He tells her to either make him meet Kavya or connect him to her over the phone.

Arjun feels grateful to Anjali for accepting to help him and promises to win the award for her.

Anjali comes to meet Kavya and calls Arjun to talk with Kavya.

In the meantime, Preeta remembers leaving Kavya’s tiffin in the car and calls Rishabh to go and give it back to her.

Kavya complains to Arjun for not coming to meet him and asks him to meet her in the evening.

Arjun thanks Anjali for making him talk with Kavya.

Arjun is happy to talk with Kavya and vows to keep her with him forever.

© Copyright tellybest.com, 2022, 2023. All Rights Reserved. Unauthorized use and/or duplication of any material from tellybest.com without written permission is strictly prohibited.
Cached Saved on: Monday 21st of November 2022 02:18:34 AMCached Disp on: Wednesday 7th of December 2022 04:17:34 PM