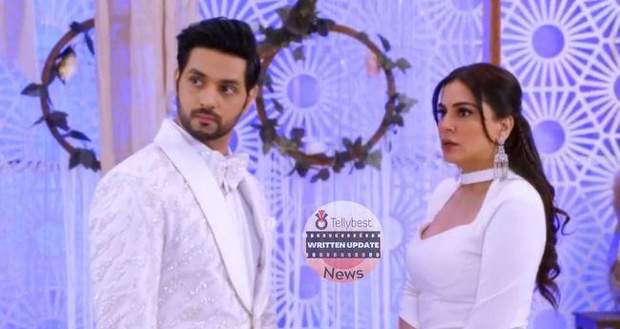 Today's Kundali Bhagya 11th October 2022 episode starts with Preeta telling to Rishabh that Arjun attacking him is a criminal offence and he had a hidden motive for entering their lives.

Rishabh feels bad for not trusting Preeta and she tells him not to trust people easily.

Sherlyn tells that Prithvi is not home while Arjun tells Sherlyn to ask Prithvi to stay away from him or else he will rot in jail.

Arjun talks out loud to hidden Prithvi that he has a new enemy in his life now named Arjun Suryavanshi.

Later, Prithvi comes out of his hidden spot and says that Arjun can not do anything to him.

However, Sherlyn warns Prithvi to beware of Arjun as he is a dangerous injured Lion and she saw the same anger in Arjun as Karan.

On the other hand, Anjali is recalling all the bad things that happened to Arjun at the party and hugs Arjun the moment he enters.

In Luthra House, Biji, Janki and Shrishti are discussing how there is a mask behind every face and they all feel betrayed by Arjun.

Shrishti says she wants to find out why Arjun did what he did to Rishabh and now she hates him.

Meanwhile, Rakhi knocks at Rishabh's door and worries to see him working late at night.

Rishabh says he is tearing the collaboration papers as they are no more related to Arjun.

Rakhi apologizes to Preeta for trusting Arjun over her while Preeta says that everybody is very innocent in their family and that they can not see the bad in others.

At night, Arjun is tossing in bed remembering the insult at Party and starts drinking.

Arjun decides to avenge his insult and says that he will not be held by his old relations.

In the morning in the Luthra House, Rakhi tells Rishabh and Preeta that the next day is Karwa Chauth and she as a mother in law will give a gift to Preeta and Shristi.

Rakhi asks Rishabh and Sameer to take their wife for shopping while both the boys try to evade it as they have an important meeting.

Rakhi convinces that meeting can wait but not the festival while Mahesh praises her for her management skills.

Later, Arjun is driving with Anjali who is angry for the insult Arjun had to bear and soiled his reputation.

To lighten Anjali's mood, he takes her shopping.

Shrishti is excited about the shopping while Preeta joins her and after a minute Rishabh and Sameer join too.

At the same time, Arjun enters the place with Anjali while Preeta feels someone's presence close to her heart unaware it is because of Arjun.

© Copyright tellybest.com, 2022, 2023. All Rights Reserved. Unauthorized use and/or duplication of any material from tellybest.com without written permission is strictly prohibited.
Cached Saved on: Monday 21st of November 2022 01:17:05 AMCached Disp on: Wednesday 7th of December 2022 04:37:42 PM