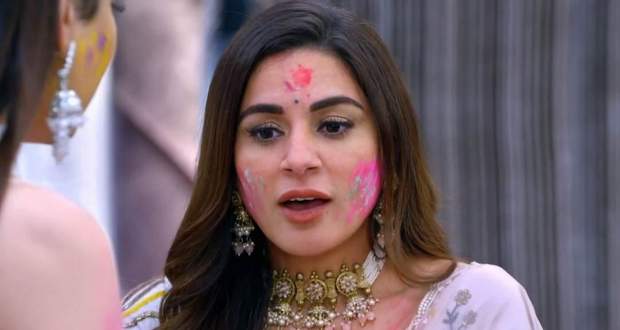 Meanwhile, they meet with Nagre and PM who says that he can open any door.

Natasha challenges PM to open the lock which he does open in a second.

Natasha gets impressed and takes PM to open Preeta’s room.

Meanwhile, Karan tells Preeta that he finds Preeta cute when she is angry while Preeta tells him that she also finds him cute.

Sherlyn and Natasha feel irritated with PM and Nagre who are behaving like fools.

Later, PM and Nagre chase Sherlyn and Natasha after being offended.

In the room, Karan and Preeta are busy talking nonsense.

After a while, Preeta threatens to break Karan’s leg if she flirts with other girls.

Karan requests Preeta to not break his leg or else he will not be able to make runs.

Later, Preeta changes her threat, to breaking his hands, and then his face.

Karan asks her what will she do if he doesn't flirt with anyone.

This makes Preeta happy and she tells him then there will be no problem.

Afterwards, Preeta gets sad and tells Karan she is going to play with colours with someone else.

As Preeta unlatches the door, Karan catches her from the waist and stops her.

Suddenly, the atmosphere turns romantic and Karan and Preeta come closer to each other and kiss. They further get closer, lost in each other, living in romantic moments and afterwards cover themselves under a blanket.

Meanwhile, Sherlyn and Natasha run for their life as PM and Nagre follow them from behind.

After a while, Nagre’s driver comes in to get Nagre and PM back, at Sherlyn's order.

Remembering Preeta and Karan, Sherlyn and Natasha run back to Preeta's room.

On the other hand, Sameer comes to Shrishti and holds her closer and tells her that he has something to say to her.

Later, Sameer tells Shrishti that he likes her and dances with her.