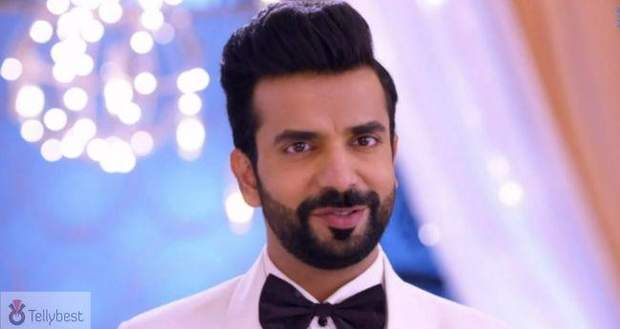 Today's Kundali Bhagya 12th August 2022 episode starts with Sameer coming to Rishabh, telling him that Taapsi Pannu is here while Rishabh informs others about Taapsi’s arrival.

They all go to meet Taapsi at the door and Rishabh thanks her for finding the time to come.

Just then Preeta and Arjun come forward to meet Taapsi and collide with each other.

Seeing them together, Taapsi calls them a cute couple.

However, Rishabh clears the misunderstanding and introduces Preeta as his wife.

As they move towards the cake, Taapsi’s hand touches Prithvi’s hand and lights begin to fluctuate and storms begin to build outside.

Taapsi tells Preeta that she has received a notification of the storm which always repeats something in someone’s life and she thinks that someone is here and that someone or something is coming back into her life.

Just then Rishabh calls Preeta to cut the cake after which Taapsi takes their leave and goes away.

Meanwhile, Raja’s goons find the jewellery but Rakhi comes to her room forcing them to hide.

Seeing the almirah open, Rakhi shuts the door and is about to leave when one of the goons makes the noise stopping her midway.

Meanwhile, Arjun taunts Preeta for marrying Rishabh and getting bored with each other.

Preeta questions him for not being married and teases him for being weird and that is why he is unmarried.

In the meantime, Rakhi asks the voice to come out and tells him that if she calls Rishabh then he will treat him very badly.

Rakhi is investigating the room and is about to see the kidnappers when Shrishti comes in and takes Rakhi away in a hurry.

Later, Sherlyn cries with regret for stealing the jewellery that was once hers.

Elsewhere, Prithvi questions Raja for running away while Raja tells him that he is putting the jammers so that no one can call the police.

After a while, Prithvi gets a call about band people and sends Raja to get them.

Later, Arjun goes to get the drink while Anjali follows him and asks him to be more Arjun because Arjun does not love Preeta.

However, Arjun tells her that he has always loved Preeta.

Anjali is surprised at Arjun’s confession while Arjun tells her that he used to love her but not anymore.

© Copyright tellybest.com, 2020, 2021. All Rights Reserved. Unauthorized use and/or duplication of any material from tellybest.com without written permission is strictly prohibited.
Cached Saved on: Sunday 2nd of October 2022 06:03:42 AMCached Disp on: Wednesday 5th of October 2022 05:04:35 PM