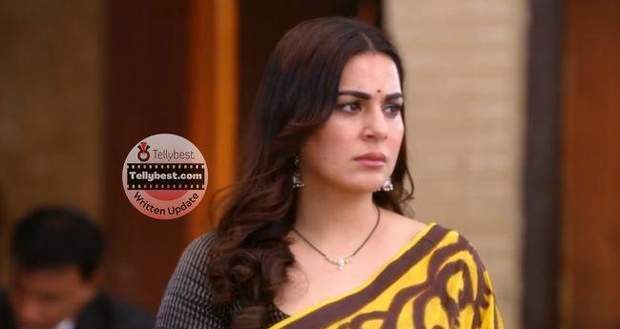 Today's Kundali Bhagya 12th December 2022 episode starts with Arjun coming to Luthra Mansion & telling Rishabh that whatever Rishabh calls his, he is going to steal it within the next seven days which won't be easy for anyone.

The whole Luthra family stands shocked at Arjun's warning who further states that there will only be one owner of Luthra House, including the Luthra empire.

Arjun states that he is going to shake everything that belongs to the Luthras like a pyramid of cards and steps further to fill Preeta's forehead with vermillion.

Her jaw drops with shock as Arjun fills her forehead suddenly & promises Rishabh to steal his pride too, which resides within Preeta.

Rishabh loses his control and grabs Arjun's collar to beat him black and blue.

Arjun keeps staring at Preeta and doesn't raise his hand at Rishabh who keeps on punching him as Arjun's head hits the pillar, then the window.

Rakhi and Kareena Bua comfort Preeta by holding her as she stands shocked, unable to react.

Mahesh helps Rishabh by kicking Arjun in the gut and blood spills out of the corner of his mouth.

Screaming that Arjun has crossed all limits now, they both throw him out along with Sameer who closes the door in Arjun's face.

Before leaving, Arjun points his finger at Preeta and asks her to be ready, wearing red bridal attire as he is coming for her in the next seven days.

Preeta runs away with a panicked expression while Rishabh comes down on his knees silently & Mahesh asks him if he is alright.

Meanwhile, Anjali gets angry when she sees Arjun's beaten-up condition and threatens to call the police on the Luthra's.

However, Arjun throws the phone away from Anjali and says it happened because he filled Preeta's forehead with sindoor.

Anjali gets shocked and reminds Arjun that he is engaged to Nidhi but Arjun promises to take everything that Rishabh stole from him in the next seven days as there is a stubbornness inside him to take Preeta back like she was before for him.

At Luthra House, Preeta goes inside the bathroom and hurriedly tries to remove the sindoor Arjun filled in her forehead.

The water drips down Preeta's body along with the red color, however, its shade doesn't fade away completely.

Similarly, Anjali tells Arjun that he cannot do this but he promises Anjali to make Preeta his like a madman, not as a person who gently loves her.

He says the next time she fills her forehead, she would remember him and he then goes to shower.

The blood drips down with the water and Arjun questions when he was Karan, Preeta used to say that their love was soul-bonded.

However, when he stands in front of her now, why she cannot sense or remember him?

Meanwhile, Rakhi & Srishti run to a panicked Preeta who says this lingering red color is like a hideous spot on her forehead.

When she starts crying profusely, Rishabh comes and promises Preeta to stay positive as nobody can harm her inside Luthra House.

Preeta yells and says what is Arjun's problem when he is not even part of her Kundali Bhagya and keeps on rubbing her forehead to remove the last remaining bit.

Rishabh calmly cleans the remaining red colour with a napkin and says he will bring Kavya back from school now as Rakhi and Srishti comfort a hurting Preeta by hugging her.