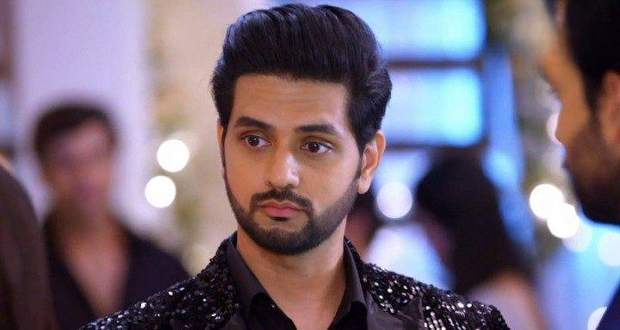 Just then Preeta comes and tells Shrishti that her name is Sameer’s password.

Shrishti tells Preeta that Sameer is not the Sameer from the past but has changed after becoming a husband.

After a while, Preeta shows Shristi Sameer’s password and tells her to not check Sameer’s phone and trust each other.

As Preeta turns away she collides with Karan and drinks splashes on her Saari.

Karan apologises and leaves without looking at her.

Preeta goes to find the restroom and ends up in Karan’s bedroom.

Preeta is having a feeling of deja vu as she reads Karan’s style in Arjun’s room. The photographs, the cricket bat arrangement, the self-obsessed portraits, choice of clothes, etc remind Preeta of Karan.

Preeta accidentally hits the button of the projector and Arjun’s picture appears on the screen and suddenly Karan's voice is heard from all directions.

Preeta gets scared and runs out of the room.

Outside the room, Preeta finds Arjun/Karan playing with the ball just like Karan.

Karan asks him if she wants to play while she looks at him in shock and goes away.

Later, Anjali comes to Karan asking about Preeta while Karan tells her that her idea worked as he was able to remind her about Karan.

Karan tells Anjali that only he has seen her real face and she is not a lover but a killer.

Karan also tells her that he wants to see Preeta in pain because she has taken everything from him even his identity and is living a content life with Rishabh and Kavya.

Anjali suggests to Arjun to give Preeta medicine of fear and make arrangements to send Preeta to Karan’s room where she plays Karan’s voice.

Karan thanks Anjali for doing so much for him.

Preeta is remembering Karan while crying in a dark corner.

Karan finds Preeta crying and instead of comforting her switches on the light.

Meanwhile, Rishabh is telling Sameer that Pandit Ji's talk of Karan has penetrated Preeta's heart and she is missing him more and more.

© Copyright tellybest.com, 2022, 2023. All Rights Reserved. Unauthorized use and/or duplication of any material from tellybest.com without written permission is strictly prohibited.
Cached Saved on: Monday 21st of November 2022 07:09:18 AMCached Disp on: Thursday 1st of December 2022 10:45:59 PM