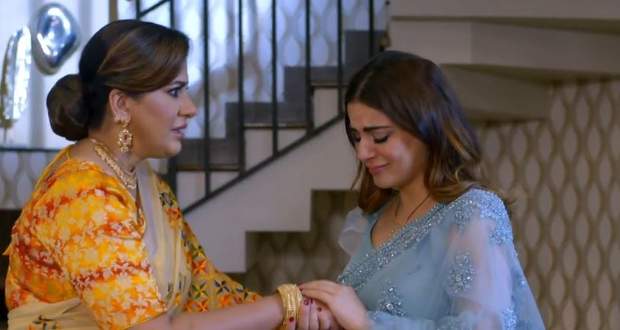 Today's Kundali Bhagya 12 May 2021 episode starts with Preeta being upset over Karan and crying while Mahesh consoles her.

He praises her and Karan for their sacrifices to save each other which angers Pammi.

Mahesh tells Preeta that they will get Karan bailed out.

Suresh notices Pammi's disinterest and scolds her for being negative.

Srishti calls Ruchika, who doesn't end the call after answering it and listens to their conversation.

Pammi reveals her dislike towards Preeta to Suresh and vows to show Rakhi and Mahesh that Preeta is not right for Karan.

Elsewhere, Preeta thinks about Karan and his family being nice to her while Rakhi tells her to be calm and relax.

Later, Preeta decides to visit Karan in jail and talk to him.

However, upon not being able to find her, he thinks that she is planning something big.

Mahira bumps into Sherlyn who is talking to Rishabh over call and thinks that her behaviour has changed.

She also thinks that Sherlyn is planning something and decides to follow her.

© Copyright tellybest.com, 2020, 2021. All Rights Reserved. Unauthorized use and/or duplication of any material from tellybest.com without written permission is strictly prohibited.
Cached Saved on: Friday 21st of January 2022 04:41:23 PM