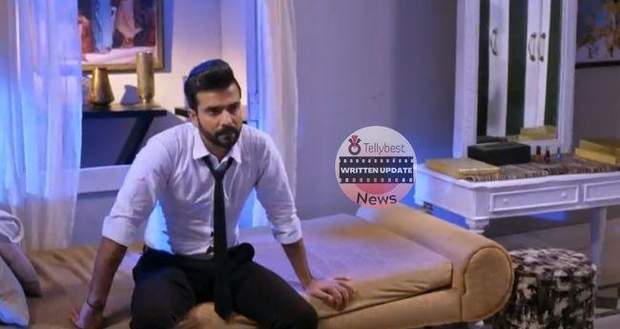 Today's Kundali Bhagya 12th October 2022 episode starts with Shrishti nudging Preeta out of her thoughts and taking her to a different section of the store.

At the same time, Anjali also asks Arjun what is he thinking about and takes her with him.

After a while, Shrishti is getting confused with a lot of options and asks to be attended to by one staff only.

Just then, Rishabh selects a Saree for Preeta while Preeta goes to try it.

After a while, Shrishti scolds Sameer for being busy on his phone and asks her to select an outfit for her.

Meanwhile, Arjun also selects a Saree for Anjali to try.

Arjun realises his mistake in coming shopping with a girl and wonders how long he has to bear the torture.

After a while, he likes a Saree and sends it to Anjali via sales girl.

Rishabh also sends a Saree to Preeta through the same Sales girl.

However, the sales girl got confused and gives Arjun’s Saree to Preeta.

Meanwhile, Rishabh has a scare when Sameer taps him while he is on call.

He tells Sameer that he is petrified at the thought of Rakhi finding out he was attending business calls while shopping with Preeta.

Later, Preeta comes out wearing the Saree that Arjun has selected.

Arjun is surprised to see Preeta in his selected dress.

Preeta calls the sales girl to tie her blouse lace.

The sales girl got called away while Arjun comes to Preeta’s help seeing her struggle and leaves right after it.

Preeta is astonished to see her lace tied while the sales girl stands far away.

Meanwhile, Arjun resolves to pay for Preeta’s Saree as it is a custom.

Afterwards, Preeta tells Rishabh that she likes the dress very much and they should buy it.

Rishabh did not clarify to Preeta that he has not selected the saree.

Just then, Rakhi calls Rishabh to find out about their shopping and praises Preeta’s outfit.

Later, Anjali comes to Arjun and is surprised to see the Luthra at the shop too.

After a while, Arjun makes the payment for both Anjali and Preeta’s Saree and goes away.

Preeta sends the dress to be billed while Shrishti tells her that she wants to explore more as there is a discount on the store.

At the payment counter, the cashier tells the sales girl that Preeta’s dress has been paid for.

Meanwhile, Shrishti and Sameer banter about the dress when the sales girl comes to tell them about the payment issue.

Afterwards, Rishabh tells the cashier that he will be paying for the sarees they have selected and asks the cashier to reverse the other payment.

© Copyright tellybest.com, 2022, 2023. All Rights Reserved. Unauthorized use and/or duplication of any material from tellybest.com without written permission is strictly prohibited.
Cached Saved on: Monday 21st of November 2022 12:59:17 AMCached Disp on: Wednesday 7th of December 2022 03:36:56 PM