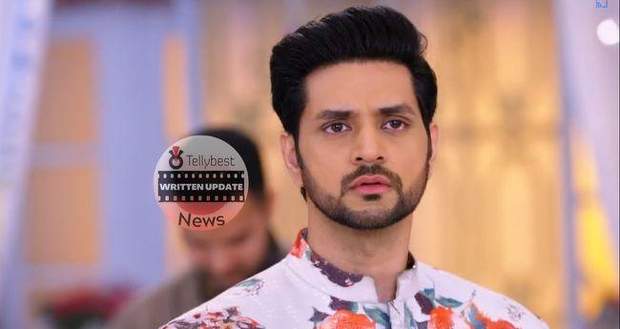 As usual, Arjun thinks that Preeta should get spectacles made which somehow Preeta hears and becomes sad thinking of Karan.

Arjun is amazed to hear that Preeta could hear his thoughts but controls himself to not get mellow on Preeta as she is only pretending it.

Meanwhile, Prithvi talks to unconscious Kritika about how foolish she is to always trust him despite his several betrayals to her.

Later, he puts Kritika in the cupboard and goes to find Arjun.

In the meantime, Arjun is watching Preeta sad and crying for him and feels her pain.

As Preeta is leaving, He catches her from behind and hugs her.
Preeta feels surprised and then feeling the support cries some more and turns towards him.

However, Arjun is only hallucinating and comes out of it when Preeta locks the door of the bathroom from inside.

After a while, Preeta composes herself and washes her face while Arjun questions himself for still being vulnerable to Preeta.

Just then, Prithvi comes into the room dressed as Pandit.

Prithvi praises Arjun for recognising him while Arjun tells him to leave or else he will call the police.

Prithvi smiles at him mockingly and shows him the video of Arjun and Raja’s communication.

Arjun throws Prithvi’s phone away and tells him to go as he will not be blackmailed by him.

Just then Preeta comes out of the room and they both hide behind the curtain.

Meanwhile, Kavya goes to hide in Karan’s room and unintentionally locks himself in the locker.

In Preeta’s room, Prithvi is wondering about Arjun hiding from Preeta.

Just then, Kavya calls Preeta from Rakhi’s mobile and tells her to come and help her.

Preeta rushes out and Arjun also goes after her but Prithvi grabs him and tells him to give him money.

Arjun is not intimidated and tells Prithvi to go and tell everything to Rishabh and then find out who will he believe.

Prithvi questions Arjun about his identity as he is not able to find anything about him.

Just then, Arjun’s gaze fell on the papers lying near the drawer and he goes to pick them up but Rishabh also arrives there.

Prithvi has already hidden while Rishabh asks Arjun what is he doing here with this paper.

Arjun concocts an excuse and leaves the room while Prithvi is having a gut feeling about Arjun having some connection with Luthra.

Meanwhile, Preeta could not find Kavya.

Later, Anjali tells Arjun about Prithvi while he tells her that he knows that Prithvi is here.

Biji overhears their conversation and asks Arjun how he knows of Prithvi.

© Copyright tellybest.com, 2020, 2021. All Rights Reserved. Unauthorized use and/or duplication of any material from tellybest.com without written permission is strictly prohibited.
Cached Saved on: Friday 30th of September 2022 06:41:42 PMCached Disp on: Saturday 1st of October 2022 12:00:38 AM