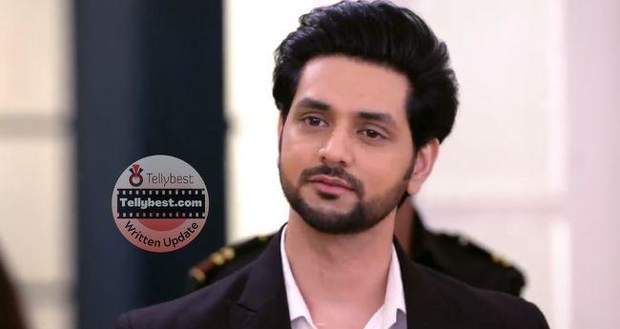 Anjali asks him the reason for throwing this open challenge in front of the Luthra's but Arjun dismisses her question and asks her whether she is going to support him or not.

Anjali gets exasperated by Arjun's persistence and states what he did was wrong.

However, Arjun tells Anjali that he wants to attack Rishabh from the front this time and make him taste the dust of defeat.

Arjun then goes to grab his phone and informs Anjali that he is setting up his calendar for the next seven days as he is going to send the screenshot of each day to Preeta.

Arjun finally asks Anjali whether she is going to back him up and she nods positively.

At Luthra House, Rishabh remembers all the incidents when Arjun came to help Preeta out of nowhere.

Rishabh says to himself that even after Preeta told him repeatedly that Arjun's vibe is angry and it seems as if he wants to take revenge, he still didn't pay attention to her.

In the night, Arjun asks Anjali about the preparations he asked her to make. Anjali curiously asks Arjun what is his plan and Arjun reveals that he has decided to attack the Luthra business building first.

Meanwhile, Rishabh calls Sameer and Mahesh into his room at midnight and asks them to help him check the previous years' accounts of their empire.

Mahesh asks Rishabh why he is doing this as Luthra's has always worked cautiously but Rishabh informs Mahesh that since he knows Arjun very well.

He says that Arjun is going to attack their business empire as he is aware of the much time, toil, & money they have invested in their work to live a respectful life.

Rishabh urges Mahesh to react since Arjun thinks they are too demure to understand his psychology.

Meanwhile, Preeta wakes up from her sleep after she sees the glimpse of Arjun filling her forehead again.

She panics and tries to grab a glass of water as Rishabh enters the room and switches on the lights. He sits near Preeta and apologizes for not paying heed to her warnings about Arjun.

Rishabh asks her not to worry since they did the right thing by throwing Arjun finally out of their hearts and their house.

Preeta smiles dimly while Rishabh takes his spot on the sofa to sleep. Similarly, Arjun is also awake and stares at the moon by standing near the window, saying that he only wants to punish Preeta and Rishabh for what they did to him.

However, as Preeta cries herself to sleep remembering Karan, Arjun also gets tears in his eyes and wonders if someone dear to him is crying through his eyes.

The next morning, Mahesh informs everyone that he is going to the office to prepare, just in case Arjun does something.

Meanwhile, Dadi chimes in and asks everyone why can't they attack Arjun first rather than wait for what he will do but Rakhi shakes her head negatively.

Elsewhere, Priyanka asks Anjali why she gets weak for Arjun and Anjali replies that Priyanka will understand her plight only when she will love someone.

Just then, Arjun interrupts their conversation and asks Anjali if everything is ready since Rishabh will be blamed for something big today so all the shares of the Luthra's come crashing down.

Anjali is positive and then questions Arjun about how her dress looks.

Arjun nonchalantly replies that she looks the same and leaves while Priyanka worriedly tells Anjali not to let him marry Preeta as Preeta can also be swooned by his handsome face.

However, Anjali says his handsome face is not the problem but his golden heart that can make anyone fall in love with him.

At Luthra House, Rakhi says she doesn't want Rishabh to attack Arjun first as she wants to bury whatever love she still has caged for him inside her heart.

The worse things are done by Arjun, the quicker Rakhi can throw him out of her tender heart.

However, Rishabh tells Rakhi that the world is not affectionate as she is and they have to teach Arjun a lesson.