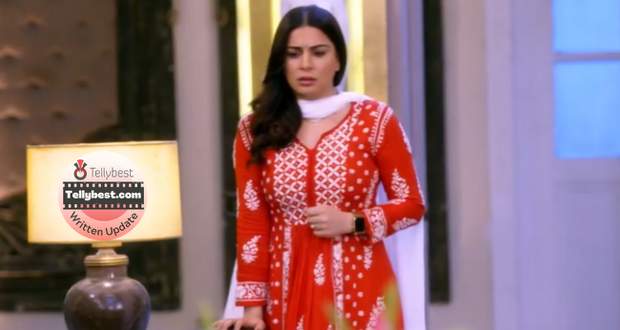 Today's Kundali Bhagya 13th January 2023 episode starts with Shrishti reminding Preeta that all of Karan’s belonging were found with his body.

Meanwhile, Arjun is looking at the pendant that is his only link to the past.

In the meantime, Preeta tells Shrishti that they will go to Arjun’s house as Incometax officers and then no one will stop them from searching for the keepsakes that relate him to Karan.

Later, Arjun keeps his pendant in the side drawer and goes to sleep.

The next day Vishwas, Preeta and Shrishti come to Arjun’s house disguised as Sardars.

Snigdha’s Dadi opens the door and gets anxious to see them.

Just then Anjali comes out of her room while Preeta and Shrishti hide from sight.

Anjali becomes suspicious and tells Vishwas that he is faking being an income tax officer.

She even pulls Vishwas's beard to confirm if it is real or not.

Vishwas gets angry and threatens to file a complaint against her and that it will cost Arjun.

However, Anjali goes to call Arjun while Dadi tangles her foot to make Vishwas fall as he follows Anjali.

Meanwhile, Arjun is working in his office when he finds Preeta’s picture in his drawer and gets lost in the past and could not see Anjali’s call as the phone is on silent.

Arjun is in dilemma and wonders if he should use this new life to finish all his rivalry and vendetta and tell everyone about him or should things be.

Meanwhile, Anjali decides to go to Arjun’s office as he is not picking up the call.

Afterwards, Preeta and Shrishti go inside Arjun’s room to look at pacers and clothes while Vishwas distracts Snigdha’s Dadi.

In the meantime, Anjali is worried about Arjun who is neither receiving her call nor calling her back.

Elsewhere, Mahesh tries to talk to Rakhi at the breakfast table but Rakhi refuses to talk.

Rakhi tells Mahesh that she does not understand her and that is why he is not believing her or feel her pain.

Mahesh burst into frustration and tells her that he is equally hurt and feels the pain of Karan’s loss but what he is not able to understand is why Arjun who is Karan not call him father and Dadi his Dadi. Why is he keeping himself away from them?

Later, Dadi tells Rakhi to not take Mahesh's outburst to heart as neither she nor Mahesh is wrong but it is all God’s will.

In the meantime, Anjali arrives at Arjun’s office fuming in anger while Arjun immediately hides the photo.

Anjali scolds him for not picking up her phone and how she escaped an accident just to get the information to him while he is gazing at Preeta’s photo.

Anjali reminds Arjun that Preeta has tried to kill him.

However, Arjun stops her in between and tells her that she cannot say anything about Preeta.

Anjali tells Arjun why is he fighting with her over Preeta while Arjun tells her that Anjali is her good friend and Preeta is his love.

However, Arjun corrects himself and tells him that he used to love her before.

Meanwhile, Vishwas comes to Preeta and Shrishti to offer his help.

He also tells them that he will look for something that does not match with Arjun’s personality.

After a while, Preeta asks him what he does for a living and is shocked to hear that he is in the police.

Just then bell rings worrying the trio, as Arjun might have come home.