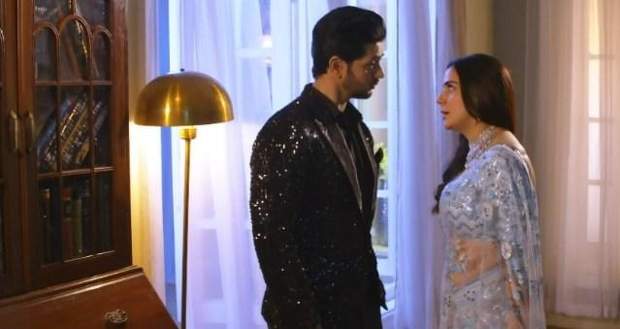 Today's Kundali Bhagya 13th July 2022 episode starts with Preeta telling Arjun/Karan that he is copying Karan in everything but copying Karan's style will not make him Karan.

She tells him that he is obsessed with Karan but he cannot become Karan ever as their faces will remain different.

Arjun/ Karan tells her that both Karan and Arjun are the same.

Preeta tells him that he is some psycho fan of Karan and requests him to stop copying Karan for the sake of God.

Arjun/Karan tries to stop her but tears her Saari and offer to replace it with five Saari’s.

Meanwhile, Rishabh stops Shrishti to ask about Preeta but ends up giving a lecture to Shrishti about trusting Sameer.

Preeta cries while telling Rishabh about Arjun/Karan’s room but Rishabh tries to calm her.

Karan observes them and gets angry.

Karan disturbs their conversation while Preeta gets angry with him.

Rishabh takes Karan aside and tells him that he is behaving like an impatient child and he is not angry with him because he reminds him of Karan but he better not test his patience.

Arjun/Karan gets agitated and tells Rishabh that he is nothing like Karan.

Rishabh questions him for reacting to Karan’s name while Karan tells him that he cannot digest the fact that Preeta married him.

Meanwhile, Preeta tells Anjali to not torture herself working for Arjun as he is complex and irritating.

Anjali tells her that she like Arjun as a boss and asks Preeta why did she marry Rishabh.

Rishabh questions Arjun/Karan about his reason for asking the question while Karan tells him that he cannot grasp why Karan’s ideal wife married someone else.

Rishabh tells him to not believe everything on social media.

Preeta tells Anjali that she cannot ask such a personal question to her as they are not friends.

After a while, Anjali informs Karan about the time.

Afterwards, Rishabh gets the message about CCTV footage being found.

Meanwhile, Anjali exposes Shrishti’s stealing Sameer’s phone which angers Shrishti and she accuses Anjali of having designs on Sameer.

Sameer calls Preeta for help who takes Shrishti away from the fight.

In the meantime, Kavya is playing with Biji who reminds her of Karan.

Preeta tells Shrishti to trust Sameer and not get over-possessive about him.

Rishabh leaves Preeta’s mobile on the table which Karan picks up and receives Biji's call but instantly cuts it.