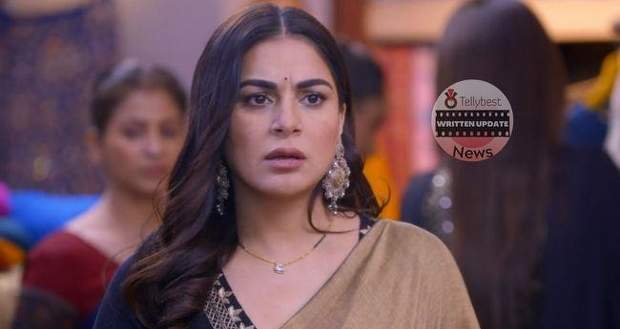 Today's Kundali Bhagya 13th October 2022 episode starts with Sameer passing his card to pay for Shrishti's dresses while Rishabh tells them to take the payment from Preeta’s Saree.

However, the cashier decides to bill another dress with Rishabh's card because he cannot punch the same product twice.

At home, Mahesh is trying to calm Rakhi’s anger when Rishabh and others return with their shopping.

Rakhi asks Rishabh why has he not told her that he is going away on business on the day of Karwachauth.

Rishabh looks caught and tells her that he did not think it to be a big deal.

Rakhi's temper flares at Rishabh dismissing the Karwachauth as unimportant and she shames him for taking the custom for granted.

Seeing the atmosphere heat up, Preeta suggests going with Rishabh so that they can balance both situations.

Later, Arjun is sitting in the office when he was handed the file for the Palace project.

Elsewhere, Sherlyn comes back from the market to see Prithvi playing on the phone.

Prithvi jokes about not having a carom and assures Sherlyn that very soon they will have enough money and then he will buy all these games.

However, Sherlyn reminds Prithvi about the necklace that he promised to buy for her next Karwachauth.

Prithvi feels caught by the sudden demand and tries to distract her.

However, Sherlyn threatens Prithvi that she will not fast for him if he does not bring her a necklace.

Prithvi dramatises Sherlyn’s threat and sarcastically tells her that he will not die if she does not fast for him.

In the meantime, Arjun is packing his stuff for the meeting when Anjali asks him to let her accompany him.

However, Arjun tells her that he has everything in control.

After a while, Rishabh wakes up at night and finds Preeta sleeping peacefully.

Rishabh turns off the alarm before Preeta can wake up but just then Rakhi comes to Rishabh’s room to wake Preeta for the Sargi.

Rishabh takes the blame for turning off the alarm to let Preeta sleep some more which makes Rakhi proud and she blesses him for being such a good husband.

Later, Mahesh and Sameer are awake to support their wives for their fast.

Between the smiles and jokes, Sargi is passed to all the daughters-in-law.

Kareena is shocked to hear the news that Preeta and Rishabh are going to be away on Karwachauth and fiercely opposes the decision.

Preeta and Rishabh try to explain the importance of meeting but Kareena pays no heed to them and walks out angrily from there.

Later, Dadi tells them to eat their Sargi and promises to pacify Kareena later.

© Copyright tellybest.com, 2022, 2023. All Rights Reserved. Unauthorized use and/or duplication of any material from tellybest.com without written permission is strictly prohibited.
Cached Saved on: Monday 21st of November 2022 08:16:24 AMCached Disp on: Wednesday 7th of December 2022 02:26:24 PM