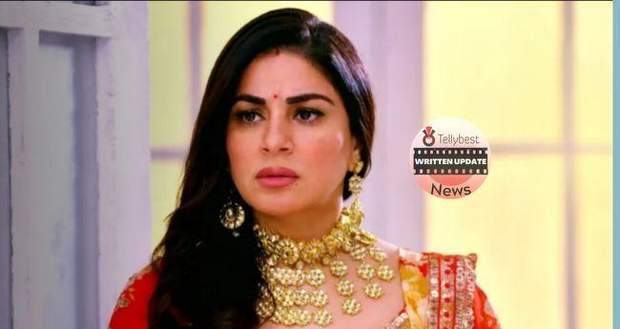 Today's Kundali Bhagya 13th September 2022 episode starts with Rishabh coming towards the curtain to check on it when Preeta comes looking for him and tells him that Kavya is in trouble.

Rishabh tries to calm her but Preeta tells him that she cannot calm down when her daughter is in danger.

Rishabh feels bad for not being included and tells her that Kavya is his daughter too and he will bring her back at the cost of his life.

Meanwhile, Prithvi does not like Rishabh’s rude answer to Preeta and wishes to be her husband instead.

In the meantime, Biji asks Arjun how he knows about Prithvi and also tells him about Prithvi’s character and how he becomes Preeta’s source of misery even after Karan’s death.

Later, Arjun tells her that Prithvi has come to him with a proposition to become a partner with him but he does not get good vibes from him so he will not be doing any business with him.

Meanwhile, Preeta and Rishabh are looking for Kavya when Rakhi asks them why they look so worried.

Preeta explains the situation to Rakhi and they all go to search for her.

After a while, Arjun spots Prithvi alone and drags him to a room to beat him for treating Preeta badly.

Prithvi becomes angry and questions him for feeling bad for Preeta when he hates her.

Arjun tells Prithvi that Preeta’s Kundali Bhagya is linked with him forever.

Prithvi suspects Arjun of loving Preeta while Anjali refutes him telling him that this is not a matter of love.

Elsewhere, Preeta is looking for Kavya and goes to Karan’s room to look for her as it was the only room left to be explored.

On the other hand, Anjali is scolding Arjun for trying to expose himself in front of Luthras while Arjun tells her to be quiet.

Arjun tells her that Preeta is the woman whom he had loved a lot and her face takes him back to the time when he loved her but when he remembers what she has done to him his hatred returns.

Just then, Shrishti comes inside the room and tells him to not talk like that about Preeta because she is very good at heart.

Meanwhile, Preeta, Rishabh and others come running into Karan’s room and call Kavya.

Preeta becomes scared to hear Kavya's voice coming from the locker while Rishabh goes to get the keys.

Elsewhere, Shrishti asks him how he knows that it is her room which puzzles Arjun and he asks Anjali to explain.

However, Anjali refuses to be a part of the conversation while Arjun calls Shrishti naughty which reminds her of Karan.