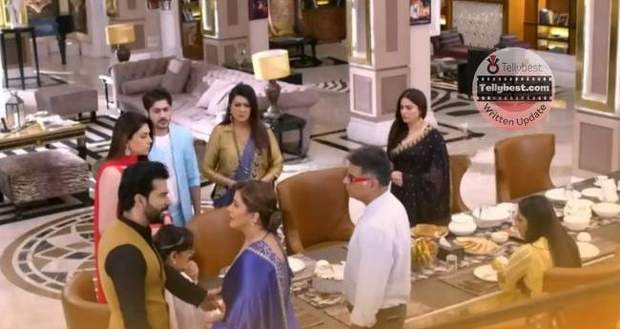 Today's Kundali Bhagya 14th December 2022 episode starts with Rakhi promising Rishabh that she will not repeat the mistake of trusting Arjun again but seeking a promise from Rishabh to never to strike first.

Dadi tells Rakhi that despite what Arjun has done, she cannot take him out of her mind.

However, Rakhi admits to hating him but also tells them that every time she looks at him, he reminds her of Karan.

Meanwhile, Sandeep calls Anjali when Arjun's car arrives near him.

Arjun gives the money to Sandeep and instructs him to do the job as per his instruction.

Afterwards, Arjun introspects thinking of Rishabh and how his half-hour delay will cost him and now he will not be able to save himself from what he has planned for him.

Meanwhile, Rakhi is remembering Karan, when Preeta comes to her with a cup of tea.

Rakhi hugs Preeta tightly while tears stream down her face.

Preeta cheers her up reminding her of Karan’s instructions.

Rakhi tells Preeta that Arjun reminds her of Karan while Preeta tells her this is because she is always searching for Karan because of her intense love for him.

She also tells Rakhi that Arjun is a bad person who is using dirty tricks to humiliate and ruin them.

After a while, Arjun spots Rishabh’s car and smiles victoriously that now the game begins and he has trapped him so well that he will not be able to save himself.

Just then, Rishabh gets a call from Pharma godown about media presence and some problems that he cannot discuss on phone.

Rishabh gets agitated and tells Mahesh that Arjun is working on ruining them.

In the meantime, Anjali calls Arjun to give him an update about the planting of false evidence and that very soon the new channels will break this news too.

Afterwards, Anjali is thinking about Priyanka’s advice about not letting him marry Preeta as hatred will turn into love in no time.

Anjali is feeling restless and tries to console herself by not thinking about Arjun who was never hers in the first place.

Just then, Anjali’s hired help informs him about planting the evidence and how things are going to fall in line.

Meanwhile, Rakhi praises Preeta for fulfilling her life like a daughter.

Rakhi tells her that she has selected her for Rishabh at first but she became Karan’s wife and now Rishabh’s too.

Just then, Shrishti comes to tell Preeta and Rakhi that their go-down has been raided and is accused of making illegal and duplicate drugs.

Meanwhile, Rishabh arrives at the go-down with Mahesh and Sameer and is bombarded with media questions.

Later, Preeta is trying to call Mr Malkani who has all the information about their business dealings.

Rakhi feels sad for trusting Arjun while Shrishti comforts her saying it is not the time for these thoughts.

Later, Preeta talks to Malkani and asks him to arrange pre-arrest bail papers for her and tells her that this is his only chance to get back in their good books.

Afterwards, Preeta, Shrishti and Rakhi go to the go-down where Rishabh and Mahesh have gone.

Meanwhile, Arjun who has come to boast to Preeta about his accomplishments looks surprised to see Rakhi drive the car and decides to reach the go down ahead of them.