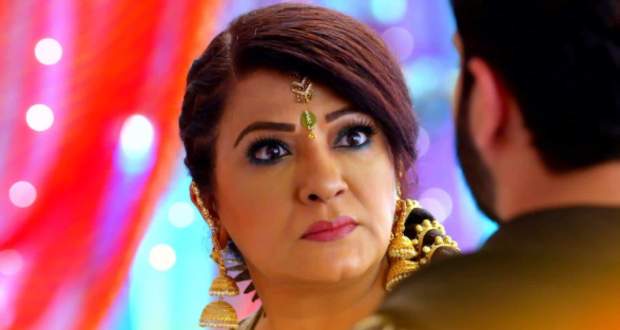 Preeta tells Karan that Ruchika has escaped from the back gate through the window. She explains Akshay didn’t reveal at first about Ruchika.

Karan thinks Preeta is thinking too much and consoles her. Kareena calls Karan and Preeta downstairs.

Ramona is pleased with her plan and tells Mahira and Sherlyn that she has instigated Kareena against Preeta.

Kareena comes outside with gifts and asks Preeta to distribute them among Akshay’s family. Ramona gets shocked to see Kareena’s behavior.

Preeta gives the gift and Akshay’s family leaves. Preeta wishes to go and drop Srishti along with Sameer and Rakhi allows her.

Preeta tells Sarla everything while Sarla doesn’t want Preeta to spoil her image in the family. She thinks no one will believe Preeta even with proof.

However, Preeta is adamant to find the truth as she doesn’t want to risk Kritika’s life. Sarla asks Preeta to be careful and Preeta leaves.

Kareena is waiting furiously for Preeta at home and rebukes her when she returns. She thinks Preeta’s accusations are invalid.

Kritika tries to console Kareena but Kareena questions what if Akshay’s family had put allegations on her.

Kareena gets rude with Preeta while Karan tries to console her. He states that Preeta was worried that’s why took the wrong step.

© Copyright tellybest.com, 2020, 2021. All Rights Reserved. Unauthorized use and/or duplication of any material from tellybest.com without written permission is strictly prohibited.
Cached Saved on: Sunday 24th of January 2021 09:32:54 PM