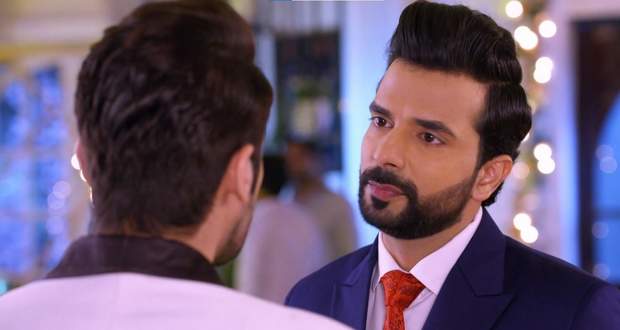 Today's Kundali Bhagya 14th July 2022 episode starts with Arjun/Karan looking at his watch and saying that time has come for him to come.

Arjun takes the stage and tells the audience that the time has come for the big reveal.

Arjun tells them that he has done explicit research about Karan and he is going to tell the truth behind the lies.

Anjali begins to narrate the story bringing in an actor to portray Karan.

After that, she introduces Preeta’s character.

As the play was moving on so is Preeta’s thoughts going back to the time when Karan was alive.

Anjali tells the audience to make their own conclusion on the basis of the story revealed.

Later, Rishabh is introduced in the skit but his face is not there.

Step by step Arjun has planned Karan’s life and has shown how Preeta and Rishabh had an affair in front of their eyes.

Arjun/Karan who is observing Preeta thinks that she is displaying all the right emotions in every scene but he knows it is nothing but drama.

Just then Karan’s voice is heard while he is hanging at the ledge. Everyone begins to feel Karan's presence while Preeta rushes to him but Arjun/Karan stops him.

Shrishti Sameer and the whole family surround Preeta and Rishabh tells Preeta that they are leaving now.

Karan sarcastically tells them that they get scared in the middle only.

Preeta tells him that she does not want to see it anymore but Karan stops her saying everything is over then let's finish it with beauty.

The actress portraying Preeta along with a masked man appears while Karan hangs and shouts for help.

And then Karan falls down while Preeta watches over him.

Rakhi goes to Arjun and hugs him while Kareena and other looks at her in shock.

Karan is shocked at Rakhi’s reaction and hugs her back.

Afterwards, Arjun/Karan tells Rakhi that everyone has become angry with him.

Rakhi tells him that it is because of what he did.

Rakhi tells him that he is mad and operates without thinking. She asks him did he has not think about how much pain they all will feel especially Preeta after seeing this skit.

Rakhi tells her that despite knowing Preeta’s pain she is standing with him because she is a mother who is programmed to forgive the child despite his mistakes.

Karan asks him why is she supporting her when she knows everything.

Rakhi tells him that she knows that he is Karan.

© Copyright tellybest.com, 2022, 2023. All Rights Reserved. Unauthorized use and/or duplication of any material from tellybest.com without written permission is strictly prohibited.
Cached Saved on: Monday 21st of November 2022 09:00:21 AMCached Disp on: Thursday 1st of December 2022 11:00:58 PM