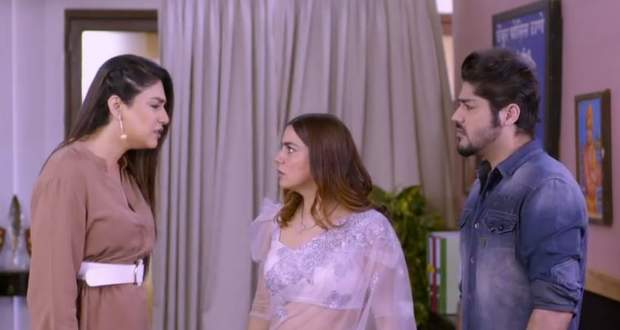 Today's Kundali Bhagya 14 May 2021 episode starts with the lady constable telling Preeta that she has to leave.

Sameer and Srishti also come to the police station to meet Karan where they argue over Megha's importance for the case of Akshay's murder.

Srishti is suspicious of Ruchika's confession while Sameer thinks that it is the truth.

Preeta sees them bickering like an old couple and thinks to talk to their families about getting them married.

Preeta tells them to meet at the police station after a few hours and goes to the hospital to get Mahesh's medical files.

Meanwhile, Rakhi and Mahesh get nostalgic remembering their moments in the old house.

Elsewhere, Ruchika tries to threaten Megha who laughs instead of being intimidated.

She reveals that her son, Akash isn't even Akshay's child.

Ruchika accuses her of murder which Megha says that she is Akshay's wife.

At the hospital, Preeta overhears Megha and the doctor's conversation and finds out that Megha is pregnant with Akshay's child.

Preeta begins to follow her while Megha tries to find the perfect place to meet Prithvi.

© Copyright tellybest.com, 2020, 2021. All Rights Reserved. Unauthorized use and/or duplication of any material from tellybest.com without written permission is strictly prohibited.
Cached Saved on: Monday 17th of January 2022 09:45:52 PM