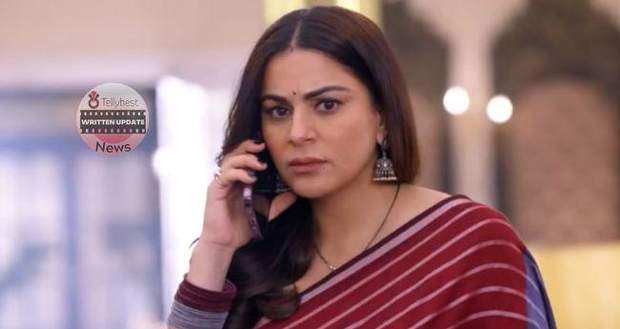 As Arjun is about to leave he sees Preeta and becomes mesmerised by her beauty.

Preeta is unaware of Arjun’s presence and smiles at the kids playing bubbles.

Later he sits in the car and goes away while Preeta has a weird feeling.

Meanwhile, Kavya comes running to Anjali when the peon comes calling her and tells Anjali to go while taking Kavya inside.

Meanwhile, Rishabh’s car is coming towards the gate at speed and collides with Anjali’s car who was backing it out of the parking.

The peon recognises them and brings them both to the hospital.

Later, Anjali wakes up in the hospital while Arjun comes to see her looking worried.

On being asked, Anjali tells him that she does not know who is the other person in the accident.

Meanwhile, Preeta and others come looking for Rishabh and the peon tells them about Anjali who has purposely caused the accident.

Meanwhile, Arjun is walking Anjali out of the hospital and calls him cute while Arjun asks her to give him a nice compliment.

Just then Preeta comes to Arjun and calls him a criminal for sending Anjali to cause Rishabh’s accident.

Both Arjun and Anjali are surprised to hear that it was Rishabh’s car.

Anjali apologises to Preeta for the accident whereas Preeta accuses Anjali of trying to kill Rishabh and that too on Arjun’s say so.

Anjali looks perplexed and asks Preeta why she would do something like this.

Preeta tells her that she has feelings for Arjun, which is why she feels compelled to help him.

However, the doctor tells her he is fine but waits outside to let the patient rest.

In the meantime, Arjun brings Anjali home and makes her sit on the couch.

Anjali enjoys Arjun’s attention and tells Arjun that he has stood against Preeta for her.

Arjun starts criticising Preeta for putting allegations about others because of Rishabh.

Anjali gets irritated and tells Arjun to let the conversation be because she is not interested in talking about Preeta and Rishabh.

She also tells her she is feeling happy that he is concerned for her and stands up to Preeta for her.

Meanwhile, Arjun tells her that she means a lot to him and that she has done so much more for him than he has.

Later, Anjali looks at Arjun with puppy eyes feeling happy at Arjun’s affection for her.

Meanwhile, Rakhi asks the peon for being here while he tells him that he has brought Rishabh and Anjali to the hospital and tells her that it was Anjali who has crashed into Rishabh’s car.

Meanwhile, the doctor comes out asking the ward boy to call the senior doctor and declares Rishabh critical because of his head bang.

Rakhi prays for Rishabh’s health and for a just punishment for Anjali if she has done something bad to him.

Hearing that Kareena looks like she has come to a decision and goes away.

Meanwhile, Arjun is talking to Anjali about Kavya when his servant tells him that Police have arrived at their door.

© Copyright tellybest.com, 2022, 2023. All Rights Reserved. Unauthorized use and/or duplication of any material from tellybest.com without written permission is strictly prohibited.
Cached Saved on: Monday 21st of November 2022 12:46:59 AMCached Disp on: Thursday 1st of December 2022 12:10:02 PM